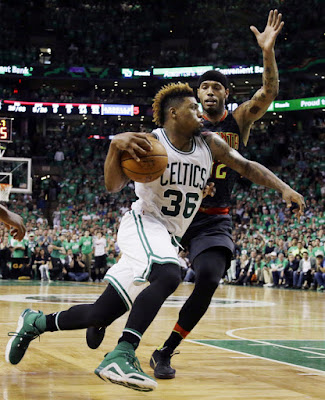 This is why NBA officials do not like Marcus Smart.

Smart was fined $5,000 for violating the league's anti-flopping rule. The NBA reviewed a fourth quarter play involving Smart and Hawks guard Kyle Korver where Korver boxed out Smart for a rebound and Smart flailed his body sideways on the baseline -- easily the best acting moment of his career.

It was a silly attempt by the second-year guard who's quickly attaining elite status as the league's greatest flopper.

Smart addressed the media about the play against Korver on Saturday.


"I was just trying to make winning plays for my team," Smart said on Saturday. "We had a great game last night, that's really what my focus is on."

It's no secret that Smart is a terrific defender whose quickness can get him to the hoop. But he struggles in getting himself to the free-throw line -- a flaw in his game that he needs to improve on as a young player who is still developing. However, referees are reluctant to call personal fouls for someone like Smart, who blatantly deceives them and is labeled a flopper.

Smart had a reputation for flopping when he was in college and it has carried it over to the pros -- where players are penalized. Sure, a $5,000 fine isn't much for an NBA player but it's the reputation that hurts not only himself but the Celtics team as a whole.

Smart, who was replaced by Evan Turner in the starting lineup, finished with 11 points, 5 assists and 2 blocks in the Celtics' Game 3 win over the Hawks on Friday.