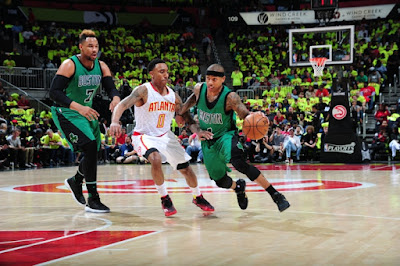 After erasing a 19-point deficit, the Celtics came up short in the final minutes against the Hawks as Atlanta prevailed in a 102-101 victory in Game 1 of the Eastern Conference quarterfinals.


For three quarters, the Celtics rallied and in the final frame Jae Crowder's corner 3-pointer gave his team their first lead of the night, 83-80 with 6:49 left. Shortly afterwards, Avery Bradley left the game after grabbing his right leg on his way up the floor and had to be helped off the court. Bradley suffered a right hamstring injury and never returned.

Bradley, who was one of the few Celtics who was scoring at a consistent level before the injury and was certainly missed on the both ends of the floor. He went 7-for-16 from the floor, and did an excellent job of defending Atlanta's backcourt -- Teague went on to score 9 points in Bradley's absence.

Al Horford (24 points) led three Hawks with at least 20 points and pulled down a game-high 12 rebounds. Jeff Teague and Kent Bazemore each scored 23.

After trading baskets with the Celtics, the Hawks grabbed a six-point lead (99-93) with 36.6 seconds left. In the end, Crowder hit another big 3-pointer to cut the deficit to two points, but Jeff Teague's free-throws sealed the win for Atlanta with five ticks left. Thomas made a 3-pointer with 0.4 left on the clock.

The Hawks only needed the game's opening six minutes to grab their first double-digit lead (20-10) and nearly doubled it when they were up 51-34 at the half. The Celtics forced turnovers, made defensive stops and scored 15 fast-break points in the second half to push themselves ahead in the second half. However, the Hawks buckled down in the final minutes and hung onto the win.

"We can't put ourselves in that big of a hole," Thomas said. "It just takes so much energy and so much time to get back in the game."

No word on the extent of Bradley's strained right hamstring, his availability is for the remainder of the series is unknown. The Celtics will have two days to regroup before Game 2 on Tuesday night in Atlanta.

It was a streaky shooting night for the Celtics. The Hawks protected the paint and challenged the C's to take jump shots, which worked in Atlanta's favor. The Celtics shot 25 percent from the floor, most of the attempts were open looks. However, it was a different story in the second half as the Celtics scored in a combination of different ways -- transition layups, 3-pointers and mid-range shots. In the end, they shot 36.3 percent on 37-of-102 shots. Despite surrendering a 19-point advantage, the Hawks countered with low-post scoring -- that's where they thrived (52 points in the paint). Atlanta's aggressiveness also led to trips to the charity stripe where they went 27-of-35.