Five Things we learned about the Celtics' road trip 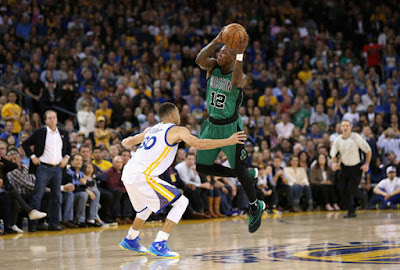 The Boston Celtics are playoff bound and at 45-32, they currently own the fourth best record in the Eastern Conference after coming off a season-high five-game road trip, where they finished 3-2. Brad Stevens has his team rolling despite having his full roster available only once in the last week in a half during the swing, but nonetheless it was a successful expedition out in the wild west.

With huge wins against Phoenix, Golden State and the Lakers, here are five things we've learned about your Celtics on their western adventure:

Sure it's only a small sample, but the growing pains of the rookie being sent and recalled from Maine (see James Young) can't be easy when you're young and ready to have your name called. Rozier was not only waiting for his number to be summoned, but he ran with it despite the scattered minutes here and there.

If you been paying attention, the maturation of the point guard began 10-days prior to Jae Crowder going down. In a game against the Blazers a month ago at the TD Garden, the rook was the six man off the bench midway through the second quarter. In six minutes he had a stat-line of 2 points, 2 steals, an assist and a block (one of the my highlights of a blowout-win that night).

His stock was on the rise and once Crowder got hurt and became questionable for the tail end of the upcoming Celtics road trip, it was a no brainer for Stevens to give Rozier some more minutes and he hasn't disappointed yet.

Rozier's stats this season (1.8 points, 1.7 rebounds in 8 minutes) don't blow you away versus his numbers in four of the last five games (DNP against Portland) at 3 points, 4.3 rebounds in 18 minutes for those that haven't been watching. But for the ones, such as myself, that did enjoy his performances and noticed the impact the rookie made in each game, give yourself a pat on the back.

In the win against the Warriors, the 6'2 point guard amongst the trees; grabbed 5 rebounds while either relieving Avery Bradley and or Isaiah Thomas in the biggest game of the year. Rozier played hard-nose defense against the MVP of the league in 17 minutes of action.

In Los Angeles against the Lakers (probably his best game of his career) Rozier played a season-high 21 minutes (taking advantage of Bradley being out), put up 6 points, 7 rebounds, 3 assists and a steal in a win.

This rookie has arrived, and it couldn't have come at a better time as the Celtics prepare for a postseason-run. Look for Rozier to make a difference in a playoff game or two.

2. Evan Turner is more valuable than most originally thought:

Though most will assume I'm going to bring up dollars and cents, that's a subject for a later date. I'm talking about what E.T. brings to the Celtics that no one can really replace, the intangibles and the ability to shine brightest while knowing when to take over without anyone having to ask him to.

In the last five-games Turner averaged 14.6 points, 5 rebounds, 3.4 assists while shooting 49-percent from the floor (highest on the team). The swingman also shot 50-percent from behind the arc (to be fair they were only 4 attempts, thus proves my point of how smart he is with his shot selection), and hit 85-percent of his free-throws while the rest of the C's shot 76.6-percent from the line during the trip.

Turner nearly single-handedly kept the Celtics ahead of the Warriors down the stretch in the fourth, finding cutters to the hoop, hitting big shots and free throws while Thomas struggled with both in the biggest win of the year.

In short, Turner has been necessary to his team's success all season long. On this road trip alone he proved to be the Celtics MVP. That's why he's that much more valuable on a team that lacks a true point guard and ball handler. He does all the little things when you need them most and comes up with huge plays when you least expect it.

In Four out of the last five games, Turner either was the second or third leading scorer, and we can't forget the huge block in Phoenix that turned out the be the game-winner for the C's.

Though he will not play on Wednesday due to an injury (click here for details), I believe Turner will be the x-factor for the Celtics come playoff time. 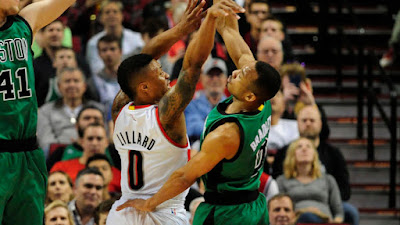 For Celtics fans, the notion that Avery Bradley is a great perimeter defender is not news but now the NBA is starting to take notice. Especially after a road trip that featured high-scoring guards like J.J. Redick, C.J. McCollum, Klay Thompson and Steph Curry.

“I told [Bradley] he was the best perimeter defender in the league,” Damian Lillard told reporters after shooting 3-for-16 in a Blazers win over the Celtics. “Because he is.” [MassLive.com]

Redick, who normally averages close to 17 points a game, was held in check by Bradley to only 9 points on eight shot attempts. Klay Thompson (47 percent on the season) shot 37-percent from the field for 15 points on 16 tries. Plus the bulk of Curry's 9 turnovers on last Friday came with Bradley as his defender.

“He’s quick,” Lillard added. “He’s strong. Good anticipation. And a lot of guys just, people say they’re defenders. They look like defenders on some possessions, but that’s what he does. That’s what he wants to do. He’s there every possession. He doesn’t get screened. He’s tough. You’ve got to give credit where it’s due.” [Boston.com]

Bradley in his last two games (Portland, Golden State) averaged 2 steals, 3.5 rebounds to go along with his 17.5 points and 3 assists. The young vet makes playing two-way basketball look really easy, but first and foremost it begins on the defensive end for him and the Celtics.

Could this be a bid for Bradley to be named to an NBA All-Defensive Team for the first time since the 2012-13 season (the last Doc Rivers coached Celtics team)?

4. Marcus Smart is back to making an impact without scoring:

We all know the story, Marcus Smart's numbers insists that not much has improved on his shooting touch (34.7-percent FGA, 24.5 percent from the 3) in his second year in the league. This road trip didn't help matters much as he shot 34-percent overall (13-of-38) and 11.7 percent from behind the arc (2-of-17). Though he did nail a huge 3-ball against Golden State late in the fourth quarter, he's returned to focusing on other areas where he can make a difference.

When Jae Crowder was out of the lineup, I felt like Smart wanted to do too much instead of letting the game just come to him. Especially when he started the first two-games that Crowder missed, he looked lost and frustrated, like he was in unfamiliar territory and to a certain extent he was. But on this road trip where he was sixth-seven guy off the bench, he picked his spots averaging 8.4 points, 4.8 assists, 6 rebounds and 1 steal per game.

I'm not concerned with his scoring from here on out especially if he attempts go down, that's a bonus if he's knocking down shots (hoping he improves on his shot selection as well). But Smart grabbing boards, especially on the offensive glass is what was key for the Celtics, and surprisingly his assists, along with his defense led to the team's offense the last five games. 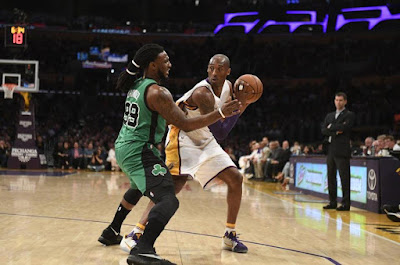 5. Celtics can win without Jae Crowder:

Now just because the Celtics are the only team this season to go 'undefeated' at Oracle Arena, that doesn't mean the C's don't need Jae Crowder (who did not play against the Warriors). That's just crazy talk.

In his only two games played on this road trip, he averaged 17.5 points, 7.5 rebounds, 3.5 assists and 3 steals. It's clear he still needs a few more games under his belt as he's shooting only 39.4 percent (44.7 percent on the season) from the field and 25 percent (34.3 percent) from behind the 3. But the Celtics were 1-1 with Crowder in the lineup against the Blazers and Lakers.

Crowder missed a total of nine games with a sprained right ankle and the Celtics were 5-4 in his absence (1-2 on this road trip) including an historic win over Golden State that I didn't think was possible. Bottom line, the C's were not a total disaster as most thought they'd be without their starting small forward.

So I think it's fair to say that if the Celtics had to play a game or two without Crowder in the playoffs, I'm confident that Brad Stevens knows how to adjust so that Boston doesn't appear to have a gapping hole that opponents can see and fully take advantage of.

In fact the first four previous points I have mentioned on what we've learned about the Celtics; have a direct correlation to Crowder being out of the lineup in one way or another (HA...plot twist, bet you didn't see that coming?)

Terry Rozier - Gained more experience which helps his development, but the fact Stevens has place trust in him, benefits both sides when looking for someone to essentially fill in for Turner (when he starts) off the bench.

Avery Bradley - Turned the defensive intensity up a notch to fill the void in the starting unit, while his assists and rebounds went up without affecting his shooting or overall point average.

Marcus Smart - When not chucking away 3-pointers, provided more help defense on the wing and perimeter, and crashes the boards. Finds teammates roaming to make the right play.

Don't get me wrong, the Celtics could survive without Crowder in short spurts, anything long-term such as re-aggravating his ankle injury or something worst, could end their season much quicker than anyone anticipated.

Now that's a road no one wants to think about traveling down.

With five-games remaining on the schedule and the fight for playoff positioning is in full swing, (C's, Hawks, Heat each have 32 losses) it will be interesting to see if Stevens looks to rest anyone in this last week of the season.