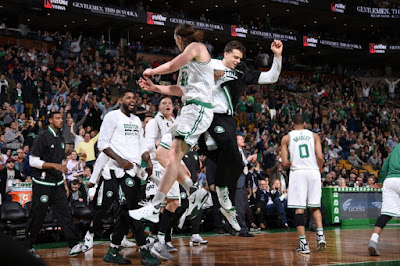 There's nothing like a blowout win at home for a team that's fighting for a No. 3 seed in the Eastern Conference.

Behind a steady defense and a second-half offensive surge, the Celtics beat the Bucks 124-109 on Friday night at TD Garden.

After Milwaukee's quick start, the Celtics outscored the Bucks in the final three quarters and cruised to their 47th win of the season. Tyler Zeller's 26 points match a career-high -- he led five Celtics in the double figures.

Isaiah Thomas did not lead the Celtics in scoring for the first time since Feb. 29 but he did reach the 20-point plateau for the 18th straight game with 20 points. Kelly Olynyk and Avery Bradley each finished with 16 and Jared Sullinger added 15.

Led by Antetokoumpo's 17 first-quarter points, the Bucks got off to a hot start and opened up a 11-point lead before the Celtics closed the quarter on a 11-5 run and pulled within five, 35-30. However, the Celtics found their offensive rhythm before halftime -- scoring in transition off of missed attempts and 3 steals.

By halftime, the Celtics scored 14 fast break points and had a 65-58 lead. Their momentum carried into the second half where they opened up a 27-point lead -- their biggest of the night. They viciously attacked the Bucks -- finishing with 70 points in the points in the paint and 27 fast-break buckets. Led by Zeller's career night, the Celtics bench tallied up 60 points.

Zeller did a stellar job of scoring in the paint and defending the hoop on the opposite end. He scored 26 points on 9-of-15 attempts and had 4 blocks. His aggressiveness got himself to the free-throw line -- where he went 8-of-9.

For 17 consecutive games, Isaiah Thomas led the Celtics in scoring -- a new franchise record. The streak came to an end on Friday, but in a game where he didn't see the floor in the final frame and his team blew out the Bucks by 15 points, Thomas is most likely not disappointed.

Thomas is also in the midst of a new streak -- he has scored 20 or more points in 18 straight games.

The Celtics attacked the basket throughout the night and finished with 70 points in the key. Tyler Zeller did a stellar job of cutting to the hoop and getting easy 2's and Jared Sullinger was posting up Milwaukee's big men and converting layups. The Bucks had a rough time clogging the paint as the Celtics were able to get high-percentage baskets.