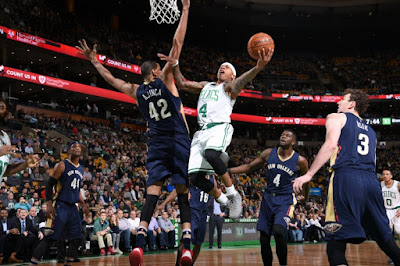 Trap game or not, the Celtics needed to beat the undermanned Pelicans in order to stay afloat in the upper tier of the Eastern Conference and even though they won -- it sure wasn't pretty.

In a game that went down to the wire, the Celtics escaped the Pelicans, 104-97 at TD Garden on Wednesday. For the 17th time in a row (franchise record), Isaiah Thomas (32 points) led the Celtics in scoring to go with his 8 assists. Jae Crowder had 14 points while Avery Bradley finished with 13 points and 6 rebounds.

The Celtics took an early 15-6 lead and Thomas capped the first half with a driving layup in the final 1.5 second, but the C's led by just eight at the break, despite forcing 14 first-half turnovers.

The Celtics again surged in the second half, grabbing a double-digit lead before an 8-0 Pelicans run cut the lead to 65-62. The two teams traded runs, and New Orleans tied the game at 91 with 3:16 remaining. The Celtics finished the game on an 11-4 run, including a monster Amir Johnson block and a clutch Avery Bradley 3-pointer to ice the victory.

Celtics coach Brad Stevens was content with his team's effort, considering the fact that the Celtics were only two days removed from their five-game west coast road trip.


"They played really well and really hard," Brad Stevens said. "I thought we looked a little road-weary, but on those nights you have to find a way. When we went up 14 we let our foot off the gas.

"They did a great job of putting their foot on the gas and getting back into the game. I was actually pretty pleased because I knew it was going to be really hard, due to the circumstances of everything, so getting back, getting a game under our belt and getting 48 more hours should feel pretty good to us."

With the win, the Celtics improved to 46-32 on the season and pulled even with the Hawks for third place in the Eastern Conference. Atlanta currently holds a 2-1 tiebreaker against the C's with one head-to-head meeting remaining on Saturday.

Whenever the Celtics needed to stop the bleeding, Thomas delivered, scoring his 32 points on 10-of-19 shooting, including 9-of-12 from the free-throw line. As Thomas continued to drive to the hoop over and over again, the Pelicans could do nothing to slow him down. His eight assisted was accompanied by a game-high plus-22 rating.

No matter how many times the Celtics forced turnovers down the stretch, they couldn't score on the other end, until the final minutes of the game -- when it mattered most. The Celtics only committed nine turnovers and finished the night with 10 steals.

The Celtics will host the Bucks on Friday at TD Garden before heading to Atlanta to face the Hawks in a crucial conference match up.

Without their core players -- Anthony Davis, Tyreke Evans, Gordon, Ryan Anderson and Jrue Holiday, among others -- the Pelicans managed 47 points from their bench. Frazier (18 points) and Luke Babbitt (16 points) led the Pelicans' reserves... Marcus Smart left the game's closing minutes after he suffered a blow to the face from Pelicans forward Dante Cunningham. Smart received four stitches before returning to the Celtics bench to watch the end of the fourth quarter.