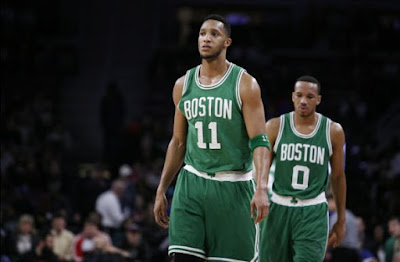 Crawford received 51-first place votes and 341 points on Tuesday from a panel of 130 sports writers and broadcasters in the U.S. and Canada. NBA Finals MVP Andre Iguodala of the Golden State Warriors finished in second with 288 points (33 first-place votes), while Oklahoma City's Enes Kanter came in third with 182 points (19 first-place votes).

Crawford, a 16-year veteran, averaged 14.2 points in 79 games (coming off the bench in 74 of them), while ranking second in the NBA in free throw percentage at 90.4 percent.

Evan Turner (10.5 points, 5 rebounds, 4.6 assists and 1 steal per game) finished fifth place in this year's voting. The Celtics swingman started in 12 out of 81 games played this season. 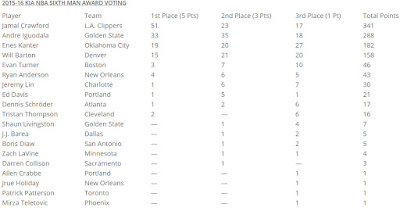 "I can't imagine anybody being more valuable off the bench than Evan," said Brad Stevens during Tuesday shootaround in Atlanta. "We'd wouldn't prefer to have anybody else at that spot."

"He's been extremely valuable. He guards three positions a night, sometimes four positions, and obviously we have him with the ball all the time." [Celtics.com]

Turner at 6-foot-7, has served as Boston's primary ball handler while finishing second on the team in total assists at 359, was happy just to be in the conversation despite the results.

"I didn't really expect to win in general," he said. "So fifth or first, it doesn't matter. It's cool to get that recognition and to be acknowledged for that." [Celtics.com].

This comes 24 hours after it was announced that teammate Avery Bradley finished sixth (first among guards) in the Defensive Player of the Year voting (Jae Crowder finished 13th).

Celtics are prepared to play Game 2 tonight (possibly the rest of the series) against Atlanta without Bradley (sprained right hamstring), their best perimeter defender in the lineup. The team will look to Turner to be a crucial cog going forward.

Though Stevens has not revealed who will start in Bradley's place, most have to assume it will be sixth man of the year candidate Turner, who as a starter this season has averaged 15 points, 6 rebounds and 4 assists per game.

Look for Turner to step up once again on Tuesday night as he has all season whenever called upon and knocked it out the park, proving again his worth on this team.