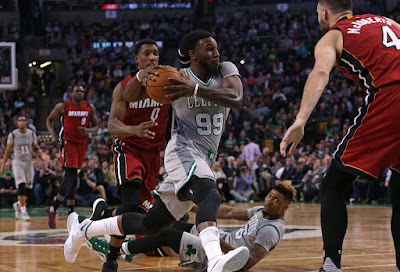 With home-court advantage on the line for both the Boston Celtics and the Miami Heat, the atmosphere at the TD Garden was reminiscent of the old rivalry between these two teams not that long ago.

With playoff implications on the final night of the regular season, the Celtics gave the Heat a 26-point advantage before Boston on fan appreciation night decided to give the home crowed something to look forward to this weekend.

With many Celtics legends on hand from three of the franchise's championship teams (66', 76' and 86'), to be honored during the game's intermission, they were also treated to biggest comeback of the 2015-16' season. The C's pulled off the feat and beat the Heat 98-88 in their home finale on Wednesday night.

Isaiah Thomas finished with a game-high 21 points and 6 assists, while Avery Bradley added 17 points and 7 rebounds. Evan Turner contributed with 16 points and 4 assists off the bench, and Jae Crowder chipped in 13 points and and 6 rebounds for the Celtics, who ended their season at 48-34.

Joe Johnson and Hassan Whiteside (9 rebounds) each finished with 19 points a piece. Goran Dragic added 18 points and Dwayne scored 17 points and handed out 5 assists for Miami who also finished the season at 48-34.

Celtics dug themselves a deep hole, early on -- the Heat went on a 21-2 first quarter run and went into the second quarter up, 35-13 -- their biggest lead of the night up to that point. Miami dissected the Celtics' defense and scored in the paint with ease. Defensively, the Heat suffocated the C's by contesting jump shots and double-teaming the post.

By halftime the Celtics trailed the Heat 62-38 and looked like all hope was lost. After a legendary presentation at half-court, it looked like Boston would go on to find their inner Celtic-pride. The C's would use a 23-3 run to start the third quarter and get back into the game, out-scoring the Heat 18-0 in the paint while forcing multiple turnovers.

Miami would go on to score only five points in the quarter (5-of-20 shooting) as the Celtics got within 67-63 to end the period. Marcus Smart would get in the face of Dragic after the Heat point guard pushed the C's guard to the floor on a box out as the quarter ended. Both benches would clear, but only double technical fouls were issued to both players.

Boston would continue to pour it on in the final frame taking their first lead on a Kelly Olynyk (11 points) three-point play in the opening minutes, and never looked back.

"That's embarrassing to have all these legends in the building and us playing this way," said Avery Bradley. "In the second half I saw a few of them smiling. It got everyone smiling on the bench. That's what it's all about -- us going out there and playing Celtic basketball."

The victory was bitter sweet for the Celtics as the Hawks (48-34) would lose to the Wizards on the road. That game would go final in the middle of the fourth quarter as the C's were beating Miami on their way to victory.

With Atlanta's loss they clinched the fourth seed, which it means that Boston has officially clinched fifth place in the conference. The Heat have clinch the third best record in the East, despite them losing to the Celtics.

Boston will go on the road to open up their first round match-up in Atlanta. A consolation prize for a hard fought six months and after the biggest comeback win in the NBA this year in their season finale.

"We fought adversity and it showed what kind of team we can be," said Bradley. "Going into the playoffs this is big for us because it gives us a lot of confidence. Not only that, we know how we need to play every single night to get the wins."

Four teams in the Eastern Conference finished with identical records of 48-34, but due to tie-breakers, the Celtics could not grab home-court advantage.

Boston will play Game 1 of the quarter-finals in Atlanta (won season series 3-1) on either Saturday or Sunday.

Celtics outscored the Heat in fast-break points 18-6. Boston dished out 20 assists on 37 made shots to the Heat's 14 assists on 38 made baskets. The C's sweep the season series against the boys from south beach for the first time since the 2009-10 season.