Former Celtic Kendrick Perkins on if Durant is considering coming to Boston: 'I do know, but I don't know' 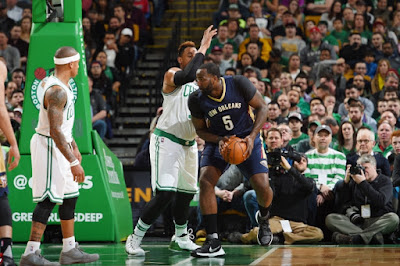 In the city of Boston, Kendrick Perkins will forever be synonymous with the 2008 NBA championship team.

But when he returned to TD Garden as a member of the New Orleans Pelicans on Wednesday night, the veteran center was welcomed with waves of cheers and with questions about his friend and former teammate -- Kevin Durant.

Durant, the soon-to-be free agent is considered to be a target for Celtics president Danny Ainge this summer. Perkins, who played five season alongside Durant in Oklahoma City, considers him a close friend of his and admitted that they've talked about Durant's big decision, this summer.


"He did shoot some teams out there that he made me sign a confidentiality form that I couldn't tell nobody," Perkins said. "He's got a few teams that he will be looking at."

When the veteran center was asked if the Celtics is a team that Durant is considering signing with, he added:

Perkins added that the Thunder's playoff performance will have an impact on Durant's decision to leave Oklahoma City .

Finally, he praised the Celtics for their success and is impressed with how well they've played this season.


"They are a scary team to go against in the playoffs," Perkins stated. "You can feel they enjoy playing with each other. They play at a high level. They've got a lot of young talent. I watched when they beat Golden State and they were very impressive. I'll tell you what, that Isaiah Thomas is playing at a high level right now."