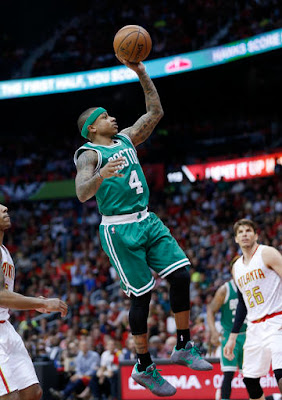 Not even a 29-point deficit could put fear into Celtics coach Brad Stevens.

With 10:14 remaining in Game 5, the Celtics were staring down almost a 30-point disadvantage when their All-star guard Isaiah Thomas suffered a mild ankle sprain and had to retreat to the locker room -- which raises the question:

Why was Thomas still in the game?

In the regular season, the Celtics climbed back from large deficits -- like they did against the Heat, when they came back from a 26 points, but much like that one, their comebacks normally start in the third quarter. When the Hawks leaped out to their biggest lead of the series in the fourth quarter, Thomas could have avoided hurting his left ankle and used that time to rest up for Game 6.


"With this team, I've seen just enough crazy stuff to think that we might be able to get back in it and give them a chance from 12 [minutes] to nine or eight, just to see if it could happen," Stevens said after Game 5. "He had a sub at the table when it happened, so I know that's quite a task and quite a mountain to overcome, but we've all seen this team do some pretty crazy things when they're down."

True, but in a series like this when you need your guys in a Game 6; do-or-die game that's in less than 48 hours -- keep it safe. Luckily, Thomas isn't sitting out even if he's forced to but his injury leaves many to wonder how effective he's going to be playing on a left ankle that is clearly not 100-percent.


"I'm doing great, ready for Game 6," Thomas said Tuesday night after the game. "Yeah, I'll play no matter what. I'm not going to sit out. I just tweaked it. I had tweaked it in Game 4 as well, in the fourth quarter, so I just tweaked it again. It hurt right when it happened, but I came back here and iced it. I'll be all right. For the most part, the swelling is all right. I don't swell that much, but hopefully it doesn't get any worst by tomorrow, which it probably will, but I'll just get treatment all day tomorrow and before the game on Thursday."

Good to hear that Thomas doesn't "swell that much" but there still isn't any assurance that he's going to return to being the 28-point scorer he was before Game 5. The Celtics can only rest him, wait and see how he responds before Thursday night's game against the Hawks.