Should Brad Stevens Move Jae Crowder to the Bench? 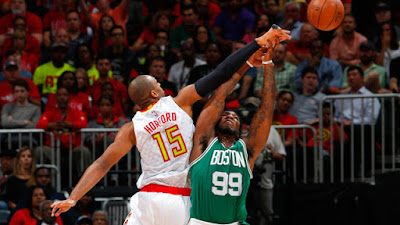 Before I go on, I will totally admit this upfront -- this is such a panic move.

However, Brad Stevens needs to make a move to shake things up, and it is time for Jae Crowder to move to the bench. I say this as one of the biggest Crowder advocates in the Greater Boston area but something needs to change.

The Hawks lead the Celtics 2-0, and the Celtics have looked lifeless for 3/4 of the opening two games. Not to say this is all on Crowder, but it is a logical place to start for Stevens; who needs to do something to spark his team.

The big question is, what is wrong with Jae?

I understand he is six weeks removed from a high ankle sprain that kept him out for nine games in the stretch run of the regular season. However, even though he wasn't the exact same player when he returned, he wasn't this bad.

Crowder looks lost and scared to do anything offensively in the opening two games of this series. You don't need a 100% ankle to play with the attitude that has made him into the type of player that is super valuable to the Celtics. In this series, he looks soft and for the first time as a Celtic he looks defeated.

Maybe it is the ankle. Or, is he just in a really bad slump? Maybe it's something else entirely, but the numbers don't lie.

Crowder is shooting a measly 24% from the field and 18% from deep in the first two games against Atlanta. (This is actually a little higher than I thought... which is saying something) He has been atrocious on the offensive end and he is shooting with zero confidence.

This level of ineptitude on the offensive end by the Celtics' second best offensive option is a huge reason for the Celtics' slow starts. They have come out flat as a team in both games and I know its not just Crowder but look at his shooting in the first half of both games.


SO MUCH RED! SO MANY ZEROS! MY EYES ARE BURNING!

This can't happen. The Celtics can't get into another huge deficit with slow starts and awful shooting. They also can't get down 3-0 in the series, so now is the time to act.

I don't want to cut his minutes drastically or anything, just take him from the starting lineup and have him come off the bench. It may even light a fire under him to regain that competitive edge he needs to be an effective player shooting the basketball. He has still been able to put his mark on the game defensively and is also rebounding at a very high rate, but the Celtics need him to score. 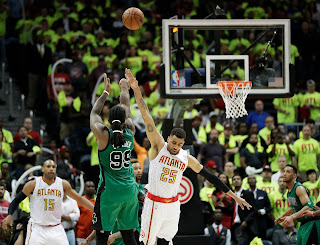 Evan Turner has been one of the "most consistent" offensive players for the Celtics so far in this series. It hasn't been an all-world performance by any means but I do think this swap can work. Turner's not a shooter so it's not the best option in the world, but he has proven to be able to at least put the ball in the hole.

This would allow Crowder to play more minutes against the second unit of the Hawks in the first half. That is maybe all he needs to get himself going. If one thing is clear, this team will only go as far as Crowder can will them. Isaiah Thomas needs to produce, but without Crowder's production this series could be over much sooner than we all thought.