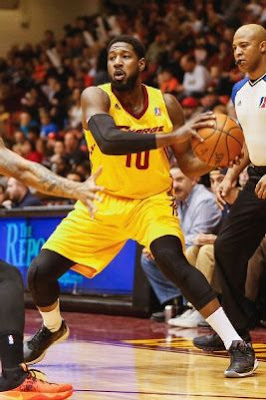 The Celtics will use their final roster spot on former Boston University standout swingman John Holland days before the start of the NBA playoffs.

After a solid regular season performance for the D-League Canton Charge, Holland stepped it up in the first round of the playoffs -- putting up averages of 28.5 points, 4.5 rebounds and 4 assists in Canton's playoff series against the Maine Red Claws. Holland led the Charge to a first-round sweep over Maine and will be available for the Celtics when the postseason kicks off this upcoming weekend.


"He's a good player. He brings shooting. He brings pretty good size for a perimeter player," Brad Stevens said. "He brings the ability to switch. And he's another person that we can add as depth, should we need some perimeter depth."

Holland was named the America East Conference Player of the Year after his senior year at Boston University. After going undrafted in the 2011 NBA Draft, Holland played overseas in France in Spain before signing a D-League contract over the winter.


"Obviously John has had a good D-League year," Brad Stevens said. "He's played overseas since he left Boston U. Obviously, he had a great career at Boston U. He played really well against us in the D-League and the D-League tournament in the first round of the playoffs."

Holland, 6-foot-5, averaged 16 points, 3 rebounds, 2 assists and 1.2 steals in 30.2 minutes per game throughout the regular season for Canton.