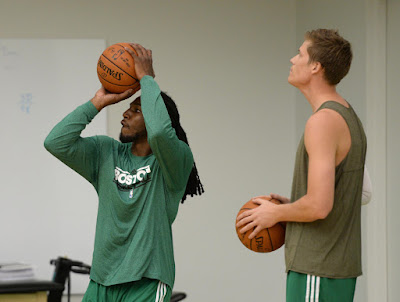 It looks like the Celtics will get their starting small forward back when they take on the Portland Trail Blazers on Thursday night.

Jae Crowder is set to make his return tonight after missing eight straight games with a high-right ankle sprain. The young veteran went through his first full practice on Wednesday where he stated that he 'felt good...real good,' and shoot around this morning with no issues.

According to Danny Ainge during his weekly appearance on a Boston sports radio station stated "Unless Jae Crowder is dealing with a setback today, he will play tonight against Portland." [CBSSports.com]

Crowder, who suffered his ankle injury back on March 11 in a home loss against the Houston Rockets, was expected to miss at least 2-3 weeks and claims he would not be making his return if he didn't feel ready to.

"If I can really compete at a level I’m capable of competing at. I don’t want to be a liability when I get back out there. I want to be as close to 100 percent as possible,” said Crowder. [Boston Herald]

Brad Stevens doesn't expect to see the same old Crowder right away, but it would be great to have his team completely healthy again before they reach the postseason and try to make a run

“I’m hopeful that, knock on wood, we can get healthy and be healthy the rest of the way through and build off some of the good things we’ve done — and hopefully get back to playing the way we were playing really before the All-Star break,” Stevens said. “That’s the last time we had everybody. I think overall though, our guys since the All-Star break — and we’ve had our moments where we haven’t played all well — but (they) have done a pretty good job of holding the fort down, to be honest. . . . I’m hopeful that we can get back to playing the way that we were playing when we’ve been all healthy earlier this year.” [Boston Herald]

The Celtics are 4-4 without Crowder in the lineup and 1-1 so far on their current five-game western swing. There are eight games remaining on the schedule before the playoffs and at 43-31 overall (one game out of third in the East), Atlanta, Miami and Charlotte each have the same amount of losses and the C's will have to face all three before they find out which seed they'll be offically.

Though Crowder will play against the Blazers, it's still unclear if the swingman will be in the lineup Friday when the Celtics take on the 68-7 Golden State Warriors on a second night of a back-to-back.

For now C's fans better embrace the fact that Stevens will have a full roster for the first time since early February.