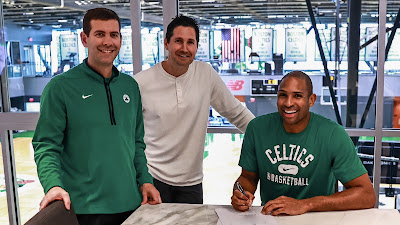 The Celtics and Al Horford have agreed to a two-year, $20 million contract extension, which was first reported by ESPN's Adrian Wojnarowski Thursday morning.
According to the veteran forward's agent Jason Glushon, the new signed contract -- which is fully guaranteed with a trade kicker -- will keep Horford in Boston through the 2024-25 season and his 39th birthday.
Horford, who's in the last year ($26.5 million) of his current deal that he inked in the summer of 2019 (worth four-year, $109 million) with the Philadelphia 76ers after opting out of the final season of his previous max-contract with the C's, played a pivotal role in Boston's NBA Finals run this past June.
Celtics president of basketball operations Brad Stevens made the reunion with Horford a reality when he acquired the 16-year vet from the Oklahoma City Thunder for former All-Star guard Kemba Walker in July of 2021, becoming a perfect complement to the young core of Jayson Tatum, Jaylen Brown, Marcus Smart and Robert Williams -- by exceeding expectations and averaging 10.2 points, 7.7 rebounds in nearly 30 minutes per game during the 2021-22 campaign.

"For me, I really did want to be a part of what we have going here," Horford told reporters Friday at shootaround. "I felt like me coming back here last year, I felt the strides of the group started to make and we've continued to make strides in the right direction."

Stevens not only kept the same core that made it to Game 6 of the Finals, but added other veterans like Malcolm Brogdon, Danilo Gallinari and Blake Griffin that have also experienced the highs and lows of competing for a championship -- something Horford has patiently been working hard towards throughout his professional career.

"More than anything, you want to be in a place where you have a chance to contend, to win," Horford said. "For me, it's more than basketball. Boston, I feel a real connection here with the people and with what the Celtics are about, and it's something that just really excited me.
"The fact that I get that opportunity and Brad believing in me and bringing me here, it's something that's special, and I'm really grateful for the opportunity."

Still, with the Celtics off to a hot 18-4 start even without Robert Williams (knee rehab) and no real urgency to get this deal done -- one that makes sense for both sides -- Horford gets some financial security while the C's lock up a valuable piece of their contending roster at a bargain, but the 36-year old is just glad it won't become a distraction from the ultimate goal.

"There are more important things that we need to focus on and now seemed like a good time," Horford said. "I just wanted to get it done and just focus on the season and not have anything linger. [I'm] very excited, I'm very happy. My family, we're very happy about it. This is where we wanted to be, so now that we know that that's over with and we can just focus on continuing to do the things that we're doing here, and continuing to put in the work every day and continue to build what we're trying to build here."

With this latest extension, all current Celtics starters are now signed through at least for the next two seasons, as Horford so far is averaging 10.9 points, 6.3 rebounds and 2.8 assists per contest, while shooting 55.5% from the field and 48.8% (second highest on the team) from 3-point range.
Joel Pavón
Follow @Joe1_CSP