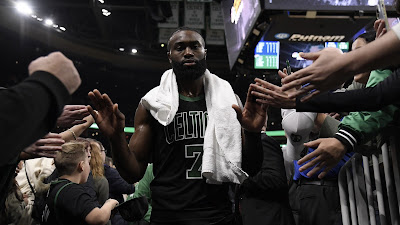 The Celtics are 2-5 in their last seven games and 5-6 in the month of December after starting the season off 18-4, despite having the best record in the NBA at 23-10.
Following Friday night's 121-109 victory over the Minnesota Timberwolves, that snapped a three-game skid (the longest of the season so far), Boston could finally breathe a sigh of relief as they got their first win of a seven-game homestand.

"We needed a win," said Jayson Tatum in his postgame presser after scoring 30 points. "We hadn't been playing great. For everybody to contribute and for us to finally get back in the win column, everybody feels a little better about themselves after tonight, and hopefully it continues."

Tatum's teammate and All-Star counterpart Jaylen Brown had a game-high 36 points -- including 23 in the fourth quarter that gave the C's a 17-point lead in the final frame and put away the T-Wolves for good with less than three minutes left to play.

"The first three quarters was, you know, was whatever, and then [the] fourth quarter, just stayed with it, just mentality. Faith, consistency, hard work pays off. And I was able to find some rhythm and some shots were able to go down," said Brown during his postgame comments.

Brown entering the fourth quarter was shooting 5-of-15 from the field and was 0-of-7 from behind the 3-point arc, while have a plus/minus of -6 through the first 36 minutes of the game.
In the final 12 minutes of play, Brown finished with 8-of-14 shooting from the field, including 3-of-6 from deep, as the Celtics outscored the Timberwolves 33-23 in the period.
Despite Brown's recent struggles on offense (29.6% from the floor) and committing turnovers (4.0 per contest) in the previous six outings (C's are 1-5), the 26-year-old knows he has to be better and no one is tougher on the wing than himself.

"Obviously, I haven't played basketball up to my level that I expect. I think, you know, we got a lot of critics in Boston, but I'm my biggest and my own toughest critic. So obviously, when you’re going through a little stretch where you could be playing a lot better, obviously you’re gonna be a little bit harder on yourself," said Brown on Friday.

During a season where Brown is putting up career numbers (26.5 points, 7.5 rebounds, 3.5 assists), his recent woes have been noticeable, especially when the team has been in desperate need of win.

"I've seen some of the highest of highs and lowest of lows. I've had nights where I didn't miss a shot. And then I've had nights where it seemed like I couldn't make a shot. So, it be like that sometimes. And you know, you don't hang your head, you get ready to try to find ways to impact winning, and tonight we needed a win tonight," said Brown.

Brown and the Celtics will look to get back on track and make a statement when they host the Milwaukee Bucks at TD Garden in a Christmas Day showdown, that tips-off today at 5:00 PM E.T. on ABC.
Joel Pavón
Follow @Joe1_CSP