Marcus Smart out vs. Brooklyn Nets with hip contusion 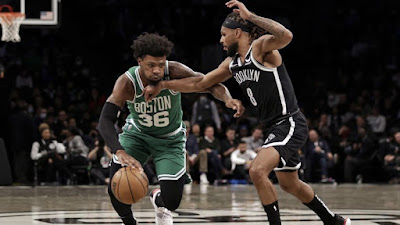 The Celtics announced they'll be without Marcus Smart when they face the Brooklyn Nets at Barclays Center Sunday night.
The veteran point guard suffered a left hip contusion in the team's 120-116 overtime loss to the Miami Heat at TD Garden Friday. Smart took a fall toward the end of the first half, but played through the pain the rest of the game.

Marcus Smart is listed as questionable for tomorrow's game vs. Brooklyn due to a left hip contusion.

He took a hard fall on it last night toward the end of the first half. pic.twitter.com/BTj3946EqH


Smart was listed as questionable Saturday before being downgraded to out ahead of the Celtics' first of of a six-game road trip. The reigning Defensive Player of the Year is off to a good start, averaging 11.8 points and a career-high 7.7 assists while shooting a personal-best 44.9% from the field, despite missing only two outings due to an ankle injury last month.
The Celtics look to bounce back after getting their five-game win streak snapped, when they take on the Nets for the first time since sweeping them in the first-round of the playoffs last spring.
Joel Pavón
Follow @Joe1_CSP