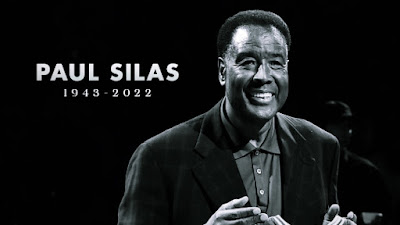 Celtics great and longtime NBA head coach Paul Silas has passed away at the age of 79, the family announced Sunday afternoon.
The former power forward played 16 years in the league after being picked 10th overall in the 1964 Draft -- becoming a three-time champion, along with being a two-time All-Star and selected to five NBA All-Defensive teams throughout his career.

I am very sad to report that the Great Paul Silas has died at age 79. To watch him play was a joy. To be his friend was an honor.

Silas won two titles during his four seasons in Boston (between 1972 and 1976), before winning a third and final championship with the Seattle Supersonics in 1979.
After retiring at the end of the 1979-80 season, Silas went into coaching briefly from 1980-1983 with the San Diego Clippers. He became a head coach once again over a decade later with the Charlotte Hornets during the shorten lockout 1998-99 campaign and would remain with the franchise for five years, even when they moved to New Orleans -- making the playoffs four out of the five seasons he was at the helm.
Silas then went on to become LeBron James' first NBA head coach when he landed in Cleveland for nearly two seasons, before getting let go 64 games into the 2004-05 campaign. He ended his coaching career following a second stint in Charlotte, but this time with the Bobcats for two seasons between 2010-2012.

"Probably one of the greatest human beings I've ever been around," James said of Silas in a postgame interview. "The start of my journey in this league started with him."

The Celtics released a statement following the news of Silas' passing, while mentioning how he was crucial part of the franchise's championship teams in 1974 and 1976.

"Paul Silas was a consummate team player and an integral member of the 1974 and 1976 NBA World Championship teams. Silas was a fierce competitor, with his tenacious rebounding and deft scoring ability around the hoop," the Celtics said via a Twitter post.

"An intense and driven player on the court, the personable and gracious Silas was an ambassador for the sport of basketball and a gentleman off the court. The Boston Celtics mourn his passing and extend our sympathies to his family and loved ones."

His son, Stephen Silas (49), is the current head coach of the Houston Rockets, was absent from the team's victory on Sunday. John Lucas, who coached in his place, dedicated the team's win to the Silas family. "That's for Coach. That one's for him.''
NBA legend Michael Jordan remembered Silas, as a coach of the Charlotte Hornets and Bobcats franchise, calling him an "incredible leader."

"Our Hornets family mourns the passing of Paul Silas. Paul was an incredible leader and motivator who served as our head coach on two occasions. He combined the knowledge developed over nearly 40 years as an NBA player and coach with an innate understanding of how to mix discipline with his never-ending positivity," Jordan said in his statement.

"On or off the court, Paul's enthusiastic and engaging personality was accompanied by an anecdote for every occasion. He was one of the all-time great people in our game, and he will be missed. My thoughts, and the thoughts of our entire organization, are with his wife, Carolyn; his children, Paula and Stephen; and the entire Silas family."

The NBA also made a statement once they learned of the untimely news of Silas, who was also inducted into the College Basketball Hall-of-Fame in 2017.

"We mourn the passing of former NBA All-Star and head coach Paul Silas," NBA Commissioner Adam Silver said. "Paul's lasting contributions to the game are seen through the many players and coaches he inspired, including his son, Rockets head coach Stephen Silas. We send our deepest condolences to Paul's family."

Click here to view some of Silas' moments with the Celtics and may he rest in peace.
Joel Pavón
Follow @Joe1_CSP