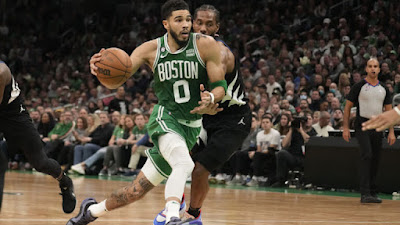 The Celtics avenged their loss from three weeks ago, as they beat the Los Angeles Clippers 116-110 Thursday night at TD Garden.
Jayson Tatum scored 29 points and grabbed 11 rebounds, while Jaylen Brown also netted 29 points on 12-of-25 from the field to go along with seven rebounds in the C's last game of 2022.

"We definitely wanted to play better than we played last time," Brown said in his postgame presser. "Those guys beat us up pretty bad in L.A. So we wanted to change the narrative tonight on our home floor and come out and get a win."

Marcus Smart added 17 points, nine assists and Derrick White chipped in 15 points with Malcolm Brogdon sitting out due to a non-COVID illness. Robert Williams had 12 points, six rebounds off the bench, as he continues to work his way into game shape.
The Celtics at 26-10 have won four-straight and still have the league's best record, despite a 113-93 loss to the Clippers earlier this month on their west coast road trip, following a prior double-digit loss to the Golden State Warriors in a NBA Finals rematch. It was the first time this season Boston was held to under 100 points during a stretch where they went 1-5.

"None of us enjoyed what happened in L.A.," said assistant coach Damon Stoudamire, who filled in for interim coach Joe Mazzulla for a second consecutive game. "We're all very prideful. So I knew they were going to come back and have an edge to them."

Kawhi Leonard finished with 26 points, eight rebounds and Paul George added 24 points on 10-of-22 shooting. Norman Powell had 19 points off the bench and Ivica Zubac notched a double-double of 13 points, 11 rebounds for the Clippers -- who fell to 21-16 on the year after winning two straight and four of their last six.
Boston was ahead by as many as 13 in the second quarter and led 60-49 at the break, before the Clippers went on a 16-7 run to open up the third, as Los Angeles tacked on 36 points in the period to take a 85-84 advantage into the final frame.
The Celtics seemed liked they regained control when they up 112-102 with 3:36 remaining, but Leonard capped off a 8-1 spurt by the Clippers with a pull up jumper in the paint to cut the deficit to 113-110 with 1:02 left to play.
On the next L.A. possession, White blocked George's layup attempt that led to a Tatum going to the free throw line on the other end. With the C's up 115-110 and 10.1 ticks left on the game clock, Al Horford (eight points, six rebounds) had his second block of the night when he swatted former teammate Marcus Morris' shot at the hoop to ice the win in the final 2.1 seconds.

"Losing three games in a row, it was humbling," Stoudamire said. "And I think that we knew we had to have better performance the next few games. The guys responded."

The Celtics wrapped up their seven-game homestand on a high note after losing the first three straight. They'll head out on the road beginning Sunday night when they face the Denver Nuggets (22-12).

Boston hit 48.4% of their attempts from the field, including 11-of-39 from deep, while the Clippers were 48.3% from the floor and 15-of-39 from behind the 3-point arc. The Celtics out-rebounded Los Angeles Clippers 49-41 and outscored them in the paint 54-42. The C's had 22 assists on 44 baskets to the visiting team's 26 dimes on 43 shots made.
Jayson Tatum passed Antoine Walker for second on the franchise's 3-point made list with his first of the night. The All-Star hit two more and has 941, trailing only Paul Pierce -- who has 1,823.
With this victory, the Celtics won their 60th game of the calendar year, more than any other team in the NBA (60-22) and the second best win percentage in team history in the last 35 years.
Joel Pavón
Follow @Joe1_CSP