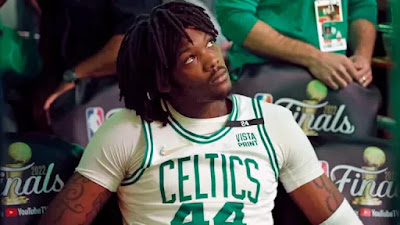 The Celtics will get a major boost as Robert Williams is reportedly set to make his season debut Friday against the Orlando Magic at TD Garden, according to ESPN's Adrian Wojnarowski.
The 25-year-old center was upgraded to questionable late Thursday afternoon ahead of the team's first matchup of a seven-game homestand.


Williams underwent an arthroscopic knee procedure in September on the same left knee that he had gotten surgically repaired of a partially torn meniscus in March -- just prior to start of the Celtics' run to the NBA Finals.
Following his most recent surgery, Williams' was set to be out 8-to-12 weeks before a return to any basketball activities -- Friday would mark 11 weeks since the knee clean up.
Despite the Celtics holding the league's best record at 22-7, after a comeback rally win in overtime Wednesday night, Williams teased a possible return last weekend in Los Angeles, calling himself "day-to-day -- but was ruled out in a Finals rematch with the Golden State Warriors (which was a long-shot), then once again was sidelined in the team's back-to-back against the Clippers and Lakers.
Boston was also without Al Horford for five of the team's six-game road-trip due to being placed in the league's Health and Safety Protocol and for personal reasons (the birth of his daughter).
The Celtics finished the road trip 4-2, while interim head coach Joe Mazzulla used Blake Griffin and Luke Kornet to make up for Horford being out, but opted to go with smaller lineups in crucial moments of the last three games of the road trip -- where they went 1-2.
While the C's have the NBA's best offense, they are currently ranked 10th in defensive rating -- a big improvement over the past few weeks -- but having Williams back in the lineup would be a major upgrade to the frontcourt, as he's one of the anchors that led the league's best defense la season ago.
Williams averaged 10.0 points, 9.6 rebounds, and 2.2 blocked shots per contest in a career year last season. He was also second in the league in blocks per-game and led the NBA in defensive rating at 102.4 during the 2021-22 campaign.
With Williams likely back with the starters tonight, the Celtics announced that  Horford was also upgraded to available, as they'll remain at home for the rest of the calendar year.
Joel Pavón
Follow @Joe1_CSP