Why Blake Griffin has been 'pretty infectious' in Celtics locker room 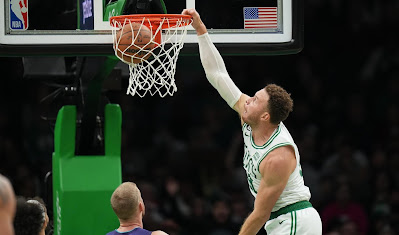 The Celtics beat the Charlotte Hornets in a 140-105 blowout Monday night and the play of the game was a thunderous dunk by none other than Blake Griffin.
The veteran forward scored nine points on 4-of-5 from the field, include a monster one-handed alley-oop slam on a lob from Derrick White, as he replaced Al Horford (back) in the starting lineup. While the 33-year-old's teammates celebrated him turning back the clock, Griffin smiled as the TD Garden crowd erupted.

"I just always think it's really funny," Griffin said in his postgame presser. "I've said this before, but at the beginning of my career, it was all, 'Do something else besides dunk,' and now everybody just wants me to dunk. So it's just a good lesson in that you can never please everybody."

Still, despite playing in just his eighth out of the C's 21 games (three starts), Griffin has been a breath of fresh air in the locker room and has stayed ready to contribute when called upon. Against the Hornets, the 13-year big-man also grabbed four rebounds (two offensive) and drew two charges in Horford's absence (hasn't played any back-to-backs this season) -- during a productive 22 minutes of action.
As the only other player on the current Celtics roster over the age of 30, outside of Horford, Griffin has embraced the role of mentor to his younger teammates even if he doesn't see the floor as a former All-Star.

"Guys flock to him," interim head coach Joe Mazzulla said to reporters after the game. "I like Blake because he's a great person, and that he is the perfect teammate for this group."

Though it doesn't always show up on the stat sheet when he does contribute, Griffin has clearly showed is value on a team that has championship aspirations.

"He's a great teammate," Luke Kornet said during his postgame comments. "He's always just uplifting guys and helping guys. It's a great balance of great being around the team, and he's a great person to have around. But also when it comes to the games, it's all business. You can tell by the way he goes out and plays and does everything he can to contribute. I think it's pretty infectious for the team, and we're very fortunate and lucky to have him."

The Celtics at a league-best 17-4, will look to win their fifth straight and 14th in 15 games when they host the Miami Heat Wednesday night.
Joel Pavón
Follow @Joe1_CSP