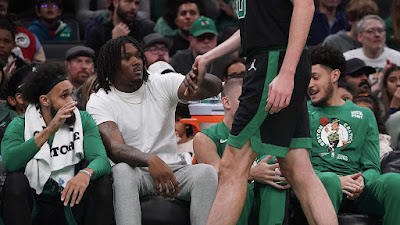 The Celtics could welcome back starting center Robert Williams sooner rather than later, according to interim head coach Joe Mazzulla.
Following video of the 25-year-old big man that they call 'Time-Lord,' participating in a scrimmage during practice Wednesday morning, Williams was seen blocking shots -- which is an encouraging sign of a potential return.


Ahead of tonight's matchup against the Miami Heat at TD Garden, Mazzulla was asked about Williams' status on his left knee, after undergoing an arthroscopic procedure in late September.

"Progression has been just continuing to get him stronger, which he's doing a great job at," Mazzulla said during his pregame presser. "And then just really his reconditioning, getting him back into game shape, and then mentally just making sure he feels comfortable.
"Hopefully he's ready to go soon. He's been working hard at it, so just continuing to get better."

While it wasn't that long ago that Mazzulla gave an update on Williams and that he had recently progressed to 3-on-3 workouts, and even ESPN's Adrian Wojnarowski reported last week (just prior to the win over the Mavericks) that the Celtics defensive anchor in the middle could be back as soon as Christmas Day -- when the Milwaukee Bucks come to Boston.

"His agent Kevin Bradbury told me tonight he expects Robert Williams will be back by Christmas," Wojnarowski said on NBA Countdown. "That gives him another month here. He's progressing well on his rehab. This is a player who had two surgeries in the last calendar year. [The Celtics] certainly want to take their time."

Though the is no rush to have Williams back in the lineup, as the C's own the league's best record at 18-4 (after beating the Heat), they have gotten by with the rotation of Al Horford (despite being 36-years-young), Grant Williams (in a contract year), Luke Kornet (better than advertised) and Blake Griffin (three starts) -- who's been reliable whenever called upon, especially when the team has been shorthanded this season.
Still, Mazzulla insists that the Celtics' hot start and Williams' timeline to make his 2022-23 debut have nothing to do with each other.

"I don't think the two are correlated," Mazzulla said Wednesday night. "I think it's more about making sure he's fit, making sure physically he's good, and just making sure his conditioning is where it needs to be, and then when he's comfortable, him coming back."

This week makes it the ninth of the original 8-12 window of Williams' rehab period and when Mazzulla was asked when would an ideal return date be for the young veteran shot-blocker?
Mazzulla simply responded with a smile, "When he's ready to go."
The Celtics will look to make it six win in a row when they host the Heat once again come Friday night at TD Garden.
Joel Pavón
Follow @Joe1_CSP