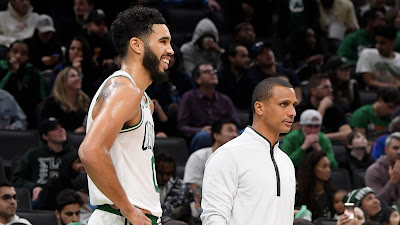 The Celtics own the NBA's best record at 18-4 and All-Star Jayson Tatum and interim coach Joe Mazzulla have earned Eastern Conference Player and Coach of the Month for October/November.
Aside from winning 14 of their last 15, the C's also own an offensive rating of 121.5 and are averaging 121.9 points per game so far this season -- with Mazzulla and Tatum having plenty to do with that.

"I'm very grateful am blessed for the opportunity that I have," said Mazzulla in his pregame presser Friday ahead of their matchup against the Miami Heat. "Like I said it's not just me, so it should be like staff of the month. It should be organization of the month in the sense of if the guys don't listen, buy in and trust, it doesn't really matter and we don't have a staff that comes in everyday and works. I'm just grateful for that and yeah, it's a special moment."

The Celtics are a full two games ahead of the Milwaukee Bucks (15-5) as the East's top seed and 2.5 ahead of the Phoenix Suns (15-6) out West for the league's best record after losing to only two teams (Cavs and Bulls).


Meanwhile, Tatum has proven he's an early MVP candidate, especially after his 49-point performance -- which was a season-high -- in Wednesday night's 134-121 victory over the Heat at TD Garden. The 25-year-old forward is averaging 31.6 points (second in the NBA) per contest while shooting 48.8% from the field, and he was a league-best plus-191 in November.


Tatum becomes the third player in franchise history to win multiple Player of the Month awards behind Paul Pierce (4) and Larry Bird (7). He also registered nine 30-point games in November -- tied for the most in a calendar month in his career -- trailing only Bird (10 in March of 1986 and 11 in March of 1988) for the most 30-point games in a calendar month in team history.
The Celtics superstar is the first in league history to record multiple (two) games of 45-plus points, 10-plus rebounds and eight-plus made 3-pointers. Tatum also became the youngest player in the NBA to hit 900 from deep.
Mazzulla and Tatum are the first Celtics tandem to win Coach and Player of the Month honors in the same month since K.C. Jones and Larry achieved the same feat in March of 1986.
Joel Pavón
Follow @Joe1_CSP