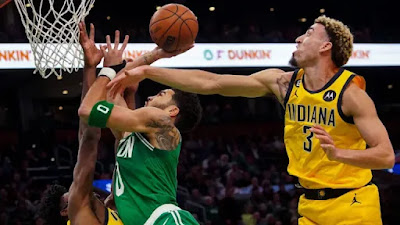 The Celtics' slump continues, as they fell to the Indiana Pacers 117-112 at the TD Garden Wednesday night -- losing their third straight.
Jayson Tatum returned from his one-game absence to score 41 points, while Marcus Smart sat out with a non-COVID illness.
Jaylen Brown notched a double-double of 19 points, 10 rebounds and Malcolm Brogdon added 18 points, seven rebounds for the Celtics -- who are 1-5 over their last six games and now 22-10 on the season.

"It's all about effort," Brogdon said in his postgame comments. "There's really not more much to it. We didn't really get the execution. You talk about execution in the first half, we didn't need to. We weren't playing hard enough to get the execution. We understood that it was about effort. I think we responded in the second half."

Boston, who were playing without Marcus Smart (non-COVID illness), trailed by as many as 30 in the first half, as boos rained down before they cut the deficit to single-digits by the fourth period, behind Tatum's 28-points in the final 24 minutes.

Tyrese Haliburton led the Pacers with 33 points on 12-of-24 from the field (6-of-11 from deep) to go along with eight assists. Former Celtic Aaron Nesmith had 15 points, six rebounds and Chris Duarte chipped in 14 points on 4-of-5 from 3-point territory for Indiana -- who are 16-16 on the year.
The Celtics tried to climb out of 20-point hole (42-22) to end the first, but Indiana pushed their lead to 71-43 by the break -- the most any opponent has scored in a half over the C's.
Al Horford hit back-to-back 3-pointers to start the third quarter and Tatum added 15 points, as Boston outscored the Pacers 42-29 to finish the period and trailed 100-85 heading into the final frame.
A 14-6 run by the Celtics, capped off by a Tatum 27-footer made it 106-99 with 6:10 remaining. Another 3-pointer -- this time by Brown -- cut the Pacers' lead to five (111-106), which was the closest they'd get the rest of the way.
Haliburton made his sixth 3 of the night on the next play, essentially sealing the win for Indiana -- only their second in six tries (including a victory over the Golden State Warriors).
While Mazzulla was pleased that his roster played with a sense of urgency in the second half, despite not getting the win, he's also not concerned about the team's recent woes either.

"We're doing a lot of good things (on both ends of the floor) and building habits that will help us down the line," said Mazzulla.

The Celtics will look to bounce back Friday night when they host the Minnesota Timberwolves (16-16) before their Christmas Day matchup against the Milwaukee Bucks.