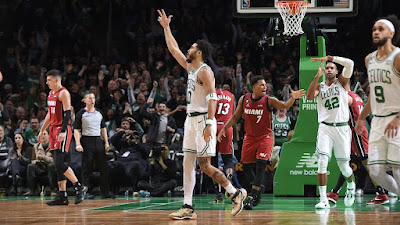 The Celtics showed out in front of the Prince and Princess of Wales Wednesday night, as they beat the Miami Heat 134-121 at TD Garden.
Jayson Tatum hit 8-of-12 from 3-point territory on his way to a season-high 49 points, while going 15-of-25 overall from the field. It was the All-Star's third time registering a 40-point performance so far to start the 2022-23 campaign, leading the league's top-rated offense and making his case for early MVP consideration.

"Just kind of being in the right spot," Tatum said in his postgame presser. "I seen a couple go down early. Just kind of shooting in rhythm."

The sixth-year forward went 11-of-12 from the free-throw line, coming up one-shy of a 50-piece, but also grabbed 11 rebounds in the Celtics fifth straight win and 14th over the last 15.

Jaylen Brown returned from a one-game absence (neck stiffness) to put up 26 points, seven rebounds and five assists, while Malcolm Brogdon added 21 points, six assists off the bench. Derrick White recorded 15 points, five assists and Marcus Smart chipped in 10 points, nine assists to help the C's improve to an NBA's best 18-4.
Max Strus led Miami with 23 points on 5-of-10 shooting from deep and Bam Adebayo also scored 23 points to go along with six rebounds, five assists. Tyler Herro had 22 points, nine assists and Haywood Highsmith netted 16 points for the Heat -- who fell to 10-12 and were without Jimmy Butler for a seventh consecutive tilt.
The Celtics jumped out to a 14-2 run, before Miami responded with a 17-2 spurt of their own to take a 27-25 advantage only to trail 38-35 after one.
Another 12-0 run by Boston gave them a comfortable double-digit lead in the second quarter, but the Heat got within eight at the break (68-60), despite 28 first half points from Tatum.
Boston was ahead 102-96 to start the final frame and the Heat cut the deficit to three (118-115) with 5:23 left to play -- the closest they'd get the rest of the way. Tatum capped a 13-6 run with his eighth 3-pointer to put the C's up for good (131-121) with 2:21 remaining to give them their 10th straight victory at home.
The Celtics will look to win six in a row when they host the Heat one more time Friday night to wrap up a six-game homestand.