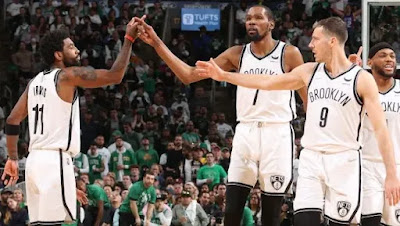 CHICAGO -- Bulls' veteran Goran Dragic remembers simpler times in the NBA.
Inside the Chicago Bulls locker room, he is donning his warm-up top, accompanied by game-ready shorts, as he thinks back to his early days in the league when a player's extracurricular activities remained relatively unknown and removed from the public's consumption.

"Back in the day, there was no social media," Dragic told Causeway Street. "So, it was a little bit different; you could say something, and that thing would not spread out so quickly."

Playing in his 15th season, first with the Bulls, Goran's seen the evolution of social media firsthand. He was selected 45th overall by the Phoenix Suns in the 2008 NBA Draft -- two years before Instagram, the popular social media platform, launched in 2010.
Fast-forward to unpreceded times in 2022, when Kyrie Irving, who Dragic played alongside as a member of the Brooklyn Nets last season, missed eight games due to an indefinite suspension handed down by the organization that inked him to a four-year, $136.5 million contract, in 2019.
Irving posted a link on social media to a documentary deemed antisemitic, which triggered a backlash from fans, Nike (one of Irving's prime endorsements), NBA commissioner Adam Silver, and, of course, the Nets organization.
Less than two weeks removed from Irving's suspension, Dragic weighed in on the hot-button topic before facing the Boston Celtics.

"Everybody has the right to say what they want. But, if you say something that is not appropriate, you have to deal with the consequences," Dragic said. "I don't have no problems with players who have opinions on matters, but at the end of the day, you have to educate yourself and know what is right and what's wrong. I'm not saying about what somebody did. But that's just the way it is. You have to know what you're talking about, especially because the NBA is a global game, you know. I cannot comment on something that is going on in Russia or China because I don't know a lot of (that) information. So, you have to be careful with what you're saying. It's tough."

Did Kyrie's punishment fit the crime?

"I don't know because it's the first time," Dragic replied. "It's really hard for me to be a judge on that one, you know. That's why the league's in charge. They're making decisions. So, like I said, you just have to do your research maybe first and then say something. But, it's hard."

Perhaps, the words and actions of NBA players on social media hold too much power.

"I would not say too much power. Maybe I look at it differently," Dragic said. Before reminding me, again, of how much accountability goes into being a professional athlete in today's world, where you're held to a higher standard, especially when there's no game being played and the camera transitions from the hardwood floor to the media's press conference and eventually onto social media platforms.

"These times right now, it's crazy. You say something, and somebody's recording you, and it goes everywhere. So, I feel like players need to be more careful with what they're saying because it's a different time," Dragic explained. "It's negative and positive. You have to know that you can be more connected with the fans for your brand on social media, but it goes both ways." 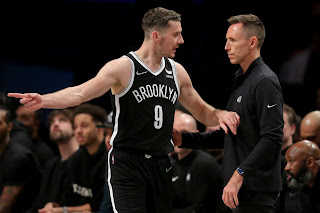 So does being a leader. And, at the twilight of Goran's career, he's seen superstars such as Irving, Kevin Durant, and Jimmy Butler find their unique approach to getting the most out of their teammates. Dragic has found his footing with the Bulls in Chicago, but it's still early, and communication is vital.
Bulls All-Star DeMar DeRozan and Zach LaVine often lead by example, which is different from how Goran's approached this season alongside his newfound teammates.

"I feel like we need to talk more. There's a lot of quiet guys here, but each individual is different," Dragic said. "DeMar, for example, brings that leadership on the floor. He's always working. First in practice, the last one out, you know. That's something unique that maybe young players need to cherish more."

It's a stark contrast to how Dragic has handled things throughout his first month with the Bulls.

"I'm a vocal guy. I talk a lot, especially trying to be in Ayo's (Dosunmu) ear and try to help him, you know. The second unit, I feel like we have good communication so far," Dragic said. "I've been a part of a team in Miami that went 11-30 the first part of the season, and then we went 30-11 (laughs). So, it was a crazy season. You know, every team goes through some tough times in the season. You just need to stick together as a team, weather the storm, and be more consistent. I feel like we have players that can do that. We've just had some bad luck."

As for the Nets, comparably speaking, Goran can't call it. However, he did point out that the drama in Brooklyn outside of basketball is a glaring difference, whereas the Bulls' season has remained distraction-free thus far. The two teams' respective predicaments are a far cry from one another.

"It's a way different situation. Different leaders. But, here, I feel like this team is more steady," Dragic said. "Not a lot of drama. So, it definitely helps. Each player is different. I feel like this is a good culture (in Chicago); who knows what they're doing, and everybody's on the same page. At least here, you can get some stability. Not to have so much drama. As a professional athlete, it's tough always to be in the news, (people) always talking about you, those negative stuff."