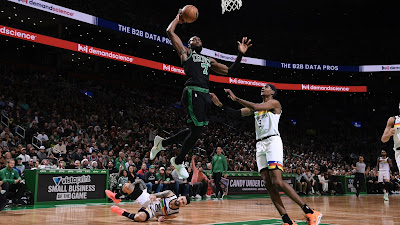 The Celtics snapped a three-game skid with a 121-109 victory over the Minnesota Timberwolves Friday night at TD Garden.
Jaylen Brown bounced back from a tough offensive performance in the C's 117-112 loss to the Indiana Pacers, by scoring 23 of is 36 points in the fourth quarter last night and also finished with seven rebounds.

"It felt good. It felt really good," Brown said in his postgame presser. "Obviously, I felt like it was just a matter of time. The first three quarters is probably one of the ugliest stretches of basketball in my career."

Jayson Tatum had 30 points, eight rebounds and five assists, Derrick White added 18 points, five rebounds, while Al Horford recorded a double-double of 17 points (5-of-10 from deep) and 11 rebounds -- to go along with three blocks and two steals.
Robert Williams sat out with a non-COVID illness after playing the previous three straight games since making his season debut last week.
Boston finished with 28 assists on 44 made shots -- led by a returning Marcus Smart (non-COVID illness) who dished out 10 -- while only committing a total of 11 turnovers, as they improved to the league's best record again of 23-10.

"The second half last game and the fourth quarter are the best version of our team," Celtics interim coach Joe Mazzulla said.

Anthony Edwards led Minnesota with 30 points, while D'Angelo Russell notched 21 points and 10 assists. Jaden McDaniels added 17 points and Naz Reid chipped in 15 points off the bench for the Timberwolves -- who fell to 16-17 on the season.
The Celtics trailed 56-54 at the break, before they took their first lead of the second half on a buzzer beating 3-pointer by Horford, putting them ahead 88-86 to end the third.
Boston used a 31-16 run to start the fourth period and were ahead by as many as 17, which was capped off with 11 unanswered points and back-to-back-to-back 3s -- including a 28-footer by Tatum that made it 119-102 with 2:53 left to play.
After coming up short in Wednesday's late rally against Indiana two days prior, where they trailed by as many as 30 points, Mazzulla was pleased with the overall play of his team following Friday's win.

"From the jump we were physical, we were tough, we were connected," Mazzulla said in his postgame comments.

The Celtics are 1-3 to start their seven-game homestand and just 2-5 overall since beating the Lakers in overtime 10 days ago. They're set to host the Milwaukee Bucks (22-10) Sunday afternoon, as ABC will have the tip-off at 5:00 ET as part of the NBA's Christmas Day lineup.