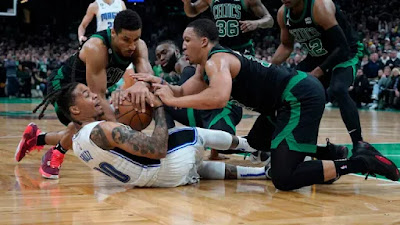 The Jayson Tatum-less Celtics fell to the Orlando Magic in a two-game sweep at TD Garden Sunday afternoon, 95-92.
Jaylen Brown finished with 24 points, 14 rebounds, while Marcus Smart added 15 points, seven assists and Grant Williams chipped in 14 points, six rebounds for the C's, who are 1-4 in their last five games and fell to 22-9 on the season -- a half game behind the Milwaukee Bucks (22-8) for the East's and NBA's overall best record.

"We just have to come in right off the gate with high energy," Smart said in his postgame presser. "We come in all sluggish and then try to wake up, that's when we get ourselves in trouble. It's going to happen. We understand it. You're going to have game's like that."

Boston's leading scorer (30.2 points) and rebounder (8.6 boards) in Tatum, missed the matchup for personal reasons, while Robert Williams played in just his second game back to contribute six points, five rebounds and two blocks in a limited 18 minutes off the bench.
Al Horford returned to the starting lineup to record eight points and six rebounds, following being ejected in the first meeting against the Magic (117-109 loss), where he was also fined $25,000 by the NBA for "unnecessary and excessive contact" when he elbowed Moritz Frantz.
Rookie Paolo Banchero had a game-high 31 points (6-of-7 from deep) and Admiral Schofield netted 13 points off the bench for Orlando -- who improved to 11-20 and won their sixth straight.
Neither team shot the ball particularly well, as the Celtics missed their first 18-of-21 from 3-point territory to trail 50-41 at the break.
Boston took their first lead of the second half (only the third at that point) when they used a 16-6 run, capped off by a Brown go-ahead 3-pointer with 7:34 remaining in the third quarter. The C's outscored the Magic 30-18 in the period and took a 71-68 advantage into the final frame.
In a back and forth fourth that featured nine lead changes, Boston was behind 93-92 with 9.1 seconds to play and Smart made a steal on a inbound pass, before they turned it over on the other end.
Mortiz Wagner (11 points, six rebounds) hit a pair of free throws to put Orlando up three, as Celtics interim coach Joe Mazzulla called his last timeout. Grant Williams front rimmed a left corner 3-pointer that would have sent it to overtime.
Despite Boston only converting 12 out of their 47 attempts from long-distance, Mazzulla was pleased for the looks they got even if they didn't go down.

"I like the shots we got and, nah, you don't adjust your approach," said Mazzulla.

The Celtics continue their homestand to finish out the month of December, when they host the Indiana Pacers (15-16) Wednesday night.