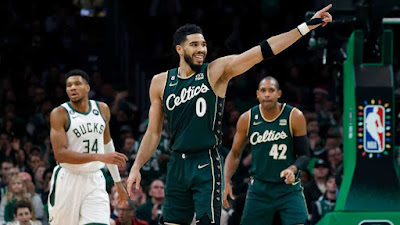 The Celtics came out clean on the other side of their Christmas Day showdown with the Milwaukee Bucks, in a 139-118 victory at TD Garden.
Jayson Tatum played all of the second and third quarter to finished with a game-high 41 points on 14-of-22 shooting from the field -- which became the second-most points scored on Christmas in franchise history, to only Tommy Heinsohn who holds the record at 45.
The All-Star also had seven rebounds, five assists, three steals and also a posturizing slam dunk over Giannis Antetokounmpo that brought the building to its feet.


While Tatum continues to put up MVP type numbers, the Celtics forward talked about how Antetekounmpo and the Bucks simply bring out the best in him and his teammates.

"They bring out the best in us," Tatum said Sunday during his postgame presser. "We know that's a team we're going to see pretty often. ... I got a lot of respect for [Giannis]. When we're not playing, I like watching the Bucks play, and he's a big reason why."

Tatum also mentioned how much he cherishes playing on Christmas, seeing as it's his sixth straight year and its something "I never take for granted."

"It’s hard to think in the moment at 24 that I have a place in Celtics history," said Tatum. "But it's definitely an honor, and I've said how much I love being here and what it means to play on Christmas."

As for the Celtics (24-10), they have now won two in a row after losing five of their previous six tries to maintain a 1.5 game-lead over the Bucks atop of the Eastern Conference. They'll face the young Houston Rockets on Tuesday before wrapping up their seven-game homestand Thursday against the Los Angeles Clippers.
Joel Pavón
Follow @Joe1_CSP