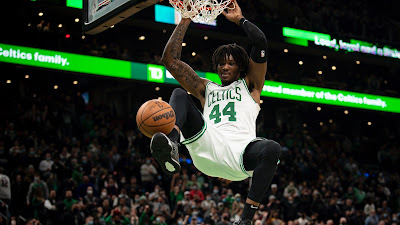 Robert Williams is expected to make his season debut at some point for the Celtics and it may be real soon, as the 25-year-old center is reportedly "day-to-day."
The young veteran spoke to reporters Friday afternoon following practice, where he participated in 4-on-4 scrimmages and was seen throwing down alley-oops.

"[I'm] feeling good, man," said Williams in his brief post-practice presser. "[I'm] happy and proud of my guys for the way they've been playing, it's been good energy."

Williams was asked when he'll be able to make his long-awaited return, to which the Celtics big man hinted at a possibility against the Lakers or Clippers in the upcoming days, as the team wraps up their six-game road trip in Los Angeles.

"It's a day-to-day process," Williams responded. "We checked off many of the boxes to check off. I worked out today feeling good and I might get some work in after this, but I'll see how I'll feel tomorrow."

Of course Williams was asked if it's possible that he could play against the Golden State Warriors, who the Celtics face Saturday night, to which the man they call Time-Lord repeated the phrase "day-to-day."

"Just like I said day-to-day stuff," Williams explained. "Testing out different things, re-testing things, while trying to get right. But day-to-day like I said, anything can happen."

While it was all smiles for Williams, even interim head coach Joe Mazzulla couldn't keep a straight face when asked on the potential return of his starting center.

"I mean he's day-to-day," Mazzulla reiterated in his mini-presser. "The most important thing for Rob is that he's comfortable where's he's at from a physical conditioning standpoint and from a mindset standpoint that he's comfortable out there and that it's going to go well for him. I think that's the most important thing is where he's at and how he feels, so he's continuing to work at it and when he's ready, he's ready."

It was just a few weeks ago that ESPN's Adrian Wojnarowski reported that Williams would return by or before Christmas Day and Mazzulla seemed encouraged with the big man's process at that time as well.
For now, the Celtics have already ruled out Williams against the Warriors and Al Horford, who missed the team's 125-98 blowout win over the Phoenix Suns, is still in the NBA's Health and Safety Protocols, so he'll also remain sidelined when the C's face the reigning champs.

Al Horford remains in health and safety protocols and is out tomorrow night.

Robert Williams is also out, despite today's dramatics

Boston is 3-0 on their current road-trip so far and own the league's best record at 21-5, as they'll tip-off against the Warriors for the first time since this past June, on ABC tomorrow night at 8:30 ET.
Joel Pavón
Follow @Joe1_CSP