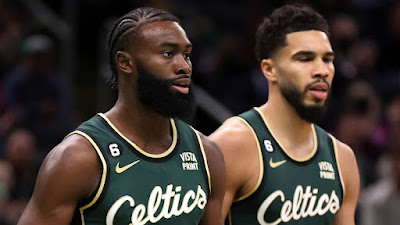 Damon Stoudamire has been on the sidelines for Celtics interim head coach Joe Mazzulla over the past two games, as the team beat the Los Angeles Clippers 116-110 to wrap up 2022.
The assistant coach, who has filled in for Mazzulla, as he recovers from a corneal abrasion, was asked about the roster's All-Stars in Jayson Tatum and Jaylen Brown following the win -- where they both combined for 58 points on 22-of-51 shooting from the field -- and what has impressed him the most since joining the Celtics' coaching staff over a year ago.

"How humble they were. Both of them," Stoudamire said Thursday night in his postgame presser. "I've been around this league a long time. I've never seen a star like JT. He's kind of a throwback. He practices. He plays. JB's the same way. For me, being in college and recruiting a lot of these guys -- I know a lot of these guys from when I was recruiting at Memphis and Arizona. I'm telling you, I tell our staff this all the time, I say, 'You should appreciate this, because it's not like that everywhere.' And people will tell you that. I appreciate them because they make it easier for you to coach them. They allow you to coach them, and they allow you to help them get better."

Boston currently holds the best record in the NBA at 26-10 after winning four in a row, while Brown is averaging 33.2 points and Tatum 32.0 per contest during that span.
Over the past few seasons, the dynamic duo has been questioned on if they can succeed together. But to Stoudamire's point that Tatum and Brown allow themselves to be coached, reigns true for the fact that the two have played for three different head coaches in each of the past three years (four if you count Stoudamire) -- Brad Stevens, Ime Udoka and now Mazzulla.
The Celtics will tip-off the new year on the road Sunday night when they face the Denver Nuggets in their first of a four-game western swing.
Joel Pavón
Follow @Joe1_CSP