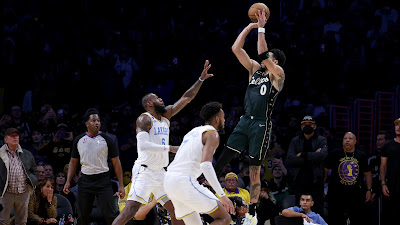 The Celtics bounced back to snap a two-game skid and beat the Los Angeles Lakers in overtime 122-118 Tuesday night at Crypto.com Arena.
Jayson Tatum led all scorers with 44 points on 15-of-29 from the field, including 5-of-10 from 3-point territory to go along with nine rebounds and six assists. Jaylen Brown had 25 points and 15 rebounds.
Marcus Smart added 18 points, six assists for the Celtics, who improved to a league's best record of 22-7 after blowing a 20-point lead halfway through the third quarter on a 45-12 run by the Lakers. Boston responded with a 17-4 run to overcome a 13-point deficit capped by Tatum hitting a 15-foot jumper in the left corner to tie it in regulation with 17.1 seconds remaining.

“That game just says a lot about our experience and mental toughness," said Brown in his postgame presser. "That's a tough and perfect way to close out our road trip."

Anthony Davis scored 37 points and grabbed 12 rebounds, while LeBron James had 33 points on 14-of-25 shooting, nine rebounds and nine assists. Russell Westbrook chipped in 20 points, 14 rebounds and five assists off the bench for the Lakers -- who fell to 11-16 on the season.
Boston trailed 106-93 in  the fourth quarter, as they rallied and the Lakers went 0-of-4 from the floor in the final 4:25 -- including a missed layup and two free throws by Davis -- before Tatum's game-tying shot over James.
With the game knotted up 110-110 heading into OT, the C's went on a 12-4 run capped by a Brown 3-pointer to put them ahead 122-114 with 53.1 seconds left to ice the win in Los Angeles and wrap up their six-game road trip at 4-2.

"Games aren't won or lost in the fourth quarter or overtime," said interim head coach Joe Mazzulla. "We have to be elite at managing the end of the third, beginning of the fourth quarter. That is where NBA games are won and lost, and we didn't do a good job managing that part of the game. So we'll take the positives of how we worked to get back in the game and then managed a run to end it, but we'll also focus on that stretch."

The Celtics will return to TD Garden for a seven-game homestand Friday night when they host the Orlando Magic (9-20).