Al Horford enters league's Health and Safety Protocols, will sit out against Suns 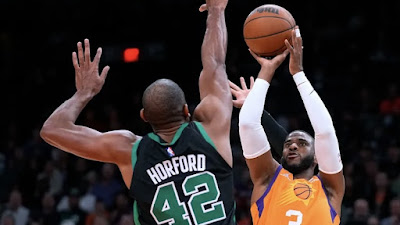 The Celtics will be shorthanded once again as Al Horford has been placed into the league's Health and Safety Protocols.
The team updated their injury report Wednesday afternoon ahead of tonight's matchup against the Phoenix Suns. Horford, who hasn't played in any of the Celtics' back-to-backs this season, sat out of the 116-110 win over the Toronto Raptors Monday.


This is the third time Horford has entered the league's Health and Safety Protocols since his reunion with the Celtics via trade last summer and he'll need two negative tests in a 24 hour period before he can return to the lineup.
Boston, owns the NBA's best record at 20-5, is off to a 2-0 start of a six-game road trip and Blake Griffin will most likely replace (4-0) Horford as a starter, while it remains unknown how long the 36-year old could be sidelined for.
Griffin scored 13 points and grabbed eight rebounds in 32 minutes of action against the Raptors, the most he's played in over two years.
Horford, who's averaging 10.2 points on 53.7% from the field and 46.6% from deep, plus 6.3 rebounds per contest, recently signed a two-year contract extension with the Celtics worth $20 million.
Meanwhile, Malcolm Brogdon (non-COVID illness) is set to return after missing the team's matchup in Toronto, as the C's improved to 5-0 in back-to-backs this season, despite already being without Robert Williams.
The Celtics and Suns (16-8) -- who'll have Chris Paul back for the first time since November 7 -- tip-off at 10:00 ET tonight on ESPN.
Joel Pavón
Follow @Joe1_CSP