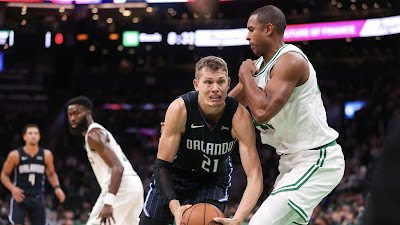 The NBA has fined Celtics big man Al Horford $25,000 for his Flagrant-two foul and ejection in Friday night's 117-109 loss to the Orlando Magic.
Boston was trailing 66-55 when Horford threw an elbow at Magic forward Moritz Wagner in an inbound play, which appeared to below the belt at the 10:39 mark of the third quarter. While the officials called a foul on Wagner for making initial contact with Horford, following a review, the C's veteran was assessed a Flagrant-two foul -- resulting in an ejection from the game.

The following has been announced by the NBA: pic.twitter.com/WwLIQfh3T7


Jayson Tatum hit a free throw from Wagner's away-from-the-play foul, but the Magic would go on a 9-0 run to take a 19-point lead (the largest of the night), to which the Celtics never recovered from -- only getting as close as eight the rest of the way.

"I don't know. You got to ask [Horford]," said Wagner when asked about the incident in his postgame presser. "I was a little surprised to be honest with you."

Horford, who returned to the lineup against the Magic after missing five-straight games, finished with six points, six rebounds and three blocks in 16 minutes of action.

"Just getting the ball inbounds, I felt like I was being kneed, kind of shoved, in an excessive fashion," Horford said of the ejection in Sunday's pregame presser. "I also thought his arm was trying to hit me, too. So I just kind of swung back with my arm, back at him."

The Celtics host the Magic once again today in a matinee afternoon tip-off from TD Garden.
Joel Pavón
Follow @Joe1_CSP