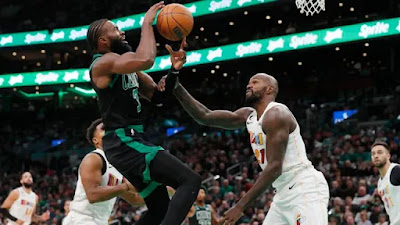 The Celtics forced overtime only to come up short in a 120-116 losing effort to the Miami Heat Friday night at TD Garden.
Jaylen Brown led all scorers with 37 points (season-high), including banking a 3-pointer to send it into overtime with 1.7 seconds left in regulation. The All-Star wing was 12-of-23 from the field and 5-of-11 from deep to go along with 14 rebounds and five assists.

"It felt good coming off my hand," Brown said in his postgame presser. "I know we wanted to get a shot up off the rim as fast as possible, just in case we missed we could get a rebound, a tip out."

Marcus Smart netted 18 points and handed out nine dimes, while Grant Williams also had 18 points off the bench on 4-of-6 from behind the arc.
Jayson Tatum, coming off Player of the Month honors for October/November, struggled offensively shooting 5-of-18, including going 0-of-7 from 3-point territory to finish with only 14 points and 12 rebounds -- after notching a season-high 49 points in Wednesday's 134-121 win over Miami.
The Celtics, who had won 10 straight at home, got their five-game win streak snapped and fell to 18-5.
Bam Adebayo notched 28 points, seven rebounds, while Tyler Herro hit 6-of-10 from long-distance to score 26 points for the Heat. Jimmy Butler returned from missing seven consecutive with a knee injury to record a double-double of 25 points and 15 rebounds. Kyle Lowry chipped in 20 points for Miami, who improved to 11-12 on the season.
Boston was ahead by as many as 13 with 3:43 left to play in the third quarter, but the Heat cut the deficit to single-digits (87-81) heading into the final frame, before they used a 19-6 run in the fourth to take a 102-97 lead with 3:53 remaining in regulation.
Brown knocking down a 30-footer off the backboard to tie it all up, capped off a 13-8 spurt by the Celtics that required five more minutes to decide an outcome.
In the extra session, there were three lead changes prior to Butler hitting a jumper over Al Horford with 1:45 left in OT and Brown knotted it up again on a pair of free throws. Adebayo connected on two more from the charity stripe, before Butler followed it up with another mid-range step back with 9.4 seconds remaining to put the Heat up four -- sealing the win and giving the Celtics their third straight overtime loss.

"Jimmy made two tough, tough baskets," Brown said. "That's just a credit to his work and his skill and his development. He gets going in games like this; on the road in a hostile environment. Tonight, two shots that in our defensive scheme we could live with, but Jimmy a big-time player made both of them."

After going 5-1 on their longest homestand, the Celtics will begin a six-game road trip Sunday when they head to Brooklyn to face the Nets (13-11) for the first time since sweeping them last spring in the first-round of the playoffs.