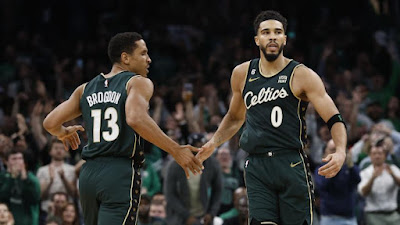 Malcolm Brogdon continues to be pleasantly surprised by his Celtics teammates since arriving to Boston via a trade this past offseason.
The veteran guard, who has settled nicely into his sixth man role so far, despite the Celtics going 1-4 over the last five games following their 95-92 loss to the Orlando Magic Sunday, they are still 22-9 to start the season.
Catching up with NBC Sports Boston's Chris Forsberg ahead of the C's matchup against Brogdon's former team -- the Indiana Pacers -- the recently turned 30-year-old spoke highly of Jayson Tatum and what has been eye-opening to him the most regarding the superstar.

"He's really as humble and as good of a guy as they come. Especially as a superstar," Brogdon said. "It's hard to find superstars that are really as laid back and personable and classy as he is. He's a well-rounded guy."

Tatum, who sat out against the Magic, is having the best campaign since entering the NBA, as he's in year six -- averaging career-highs in points (30.2 on 47% from the field) and rebounds (8.2) through 29 games played.
Brogdon is currently averaging 13.8 points on 48.6% shooting, 46.2% from behind the arc and has been a great addition to the Celtics second unit, as the roster looks to make another NBA Finals run on the way to championship banner 18.
In the meantime, Brogdon will face his ex-teammates when the Celtics host the Pacers Wednesday night at TD Garden.
Joel Pavón
Follow @Joe1_CSP