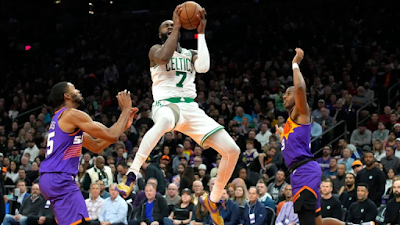 The Celtics made a statement against the Western Conference leading Phoenix Suns in a 125-98 blowout victory at Footprint Center Wednesday night.
Jaylen Brown finished with 25 points, seven rebounds and Jayson Tatum also recorded 25 points to go along with five rebounds in the C's third straight win and eighth out of their last nine tries.

"You enjoy the moment, but you've got to understand why you did it," coach Joe Mazzulla said in his postgame presser. "Then you've got to know that it's a long year. This could happen to us. It might not, but we're going to go through some type of obstacles throughout the year."

Malcolm Brogdon returned from a one-game absence due to a non-COVID related illness, to score 16 points, while Grant Williams added 14 points in a starting role with Al Horford being out after being placed into the NBA's Health and Safety Protocol just hours prior to tip-off.
No one from the Celtics who checked into the game played more than 29 minutes, as the second and third string players were subbed in by the beginning of the fourth quarter.
Josh Okogie took full advantage of his playing time, as he netted 28 points and hit 4-of-6 from deep for Phoenix. But there was not much offense, as Devin Booker had 17 points on 6-of-17 from the floor and picked up his fourth foul before halftime. Cam Payne chipped in 12 points in 16 minutes off the bench.
Despite a returning Chris Paul from a heel injury that sidelined him for 14 consecutive games, the All-Star point guard put up four points, four rebounds and four assists in 24 minutes of action for the Suns, who have lost three out of their last four and fell to 16-9 on the season.
The Celtics went on a 17-2 run to start the night and took a 31-20 advantage to end the first quarter, while Phoenix was 0-of-8 from 3-point territory.
Another 17-4 spurt by the C's ballooned their lead to 69-42 by the break, before they used a 20-7 run to make it 89-49 with 6:47 left in the third period and were up by as many as a season-high of 45 points. The Suns waived the white flag soon after by emptying their bench -- as Boston improved to a league best 21-5 record.
Boston had 29 assists on 49 made baskets, led by Marcus Smart and Derrick White -- who each had six -- Brogdon added five, with Brown and Luke Kornet (12 points on a perfect 6-of-6 from the field) dished out three apiece respectively .

"Phoenix is a great team and I thought the way we played showed the respect we had for them," Mazzulla said following the win.

The Celtics will have a couple of days off before heading to San Francisco to face the Golden State Warriors (13-13) in their first meeting with the reigning champs since last June in the Finals. ABC has the tip-off Saturday night at 8:30 ET.