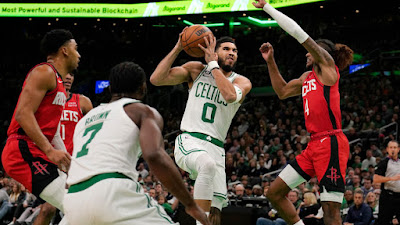 The Celtics have won three in a row and have maintained the NBA's best record at 25-10, following their 126-108 victory over the Houston Rockets at TD Garden.
Boston's All-Star tandem went to work on Wednesday night, as Jaylen Brown (14-of-26 shooting) scored a game-high 39 points and Jayson Tatum finished with 38 points on 12-of-25 from the field. It was the sixth time this season that the duo has reached 30-plus in the same game, as they only achieved that feat on eight occasions during the 2021-22 campaign.
So what's working for them so well with this 2022-23 roster? Brown explained to reporters what he believes has been the difference maker so far after 35 games.

"It think we've gotten better with experience," Brown said in his postgame presser. "I think Jayson is playing at an all-time best level for him. We're just coming out and playing and being aggressive. I think that's the key to it. Our offense and teammates allows it with spacing the floor. Guys who don't get credit like Malcolm [Brogdon], D-White, Sam Hauser, Al Horford, Grant Williams, great floor spacers. It allows us to be able to play -- we don't really see a lot of double teams.

"I think maybe one or two teams have doubled one of us all year. When you get to play with that freedom, you get out there and just make plays."

The Celtics are 17-1 all-time when both Tatum and Brown each finish with 30-plus points, as the only defeat came earlier this season to the Cleveland Cavaliers in a 132-123 overtime loss -- where Donovan Mitchell and Caris LeVert scored 40-plus respectively.
This season's depth for the C's has been a positive one with many of who Brown mentioned have shown they are capable of knocking down shots, proving more so why they are arguably the best team in the league right now.
Boston will have an opportunity to avenge another loss (earlier this month) Thursday night, when they host the Los Angeles Clippers in their 2022 finale -- as they look to wrap up their seven-game homestand (3-3) on a positive note.
Joel Pavón
Follow @Joe1_CSP