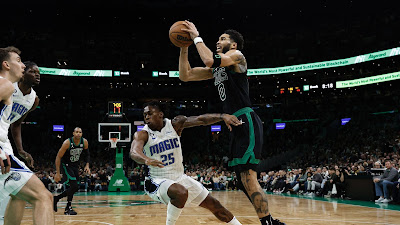 The Celtics lost for only the third time at TD Garden this season, falling to the Orlando Magic 117-109 Friday night.
Jayson Tatum led all scorers with 31 points, to go along with seven rebounds, while Jaylen Brown had 26 points and was 4-of-10 from deep. Malcolm Brogdon added 15 points off the bench and Marcus Smart chipped in 10 points, eight assists for the Celtics -- who are 1-3 in their last four tries.
Robert Williams made his return after missing the first 30 games from knee surgery to finish with nine points (4-of-4), five rebounds and a block in a limited 18 minutes as a reserve.

"I'm glad he's back healthy and back with the team. That's a plus tonight," said Tatum in his postgame comments.

Al Horford, who also missed five straight games, was back in the lineup and hit back-to-back 3-pointers to start the night, before it was cut short due to being ejected in the third quarter due to a flagrant-two call.
Former Celtic Moritz Wagner netted 25 points and grabbed eight rebounds to lead Orlando. The rookie Paolo Banchero recorded 20 points, five rebounds and five assists, while Franz Wagner added 19 points. Cole Anthony chipped in 14 points for the Magic, who improved to 10-20 (third worst record in the Eastern Conference) by winning their fifth consecutive.
The Celtics jumped out to a 14-4 lead, before Orlando responded with 28-10 run to go ahead 32-28 after one and never looked back.
The Magic had a 62-54 advantage at the break and made a 19-point deficit for Boston in the third period, using a 9-0 run following the automatic ejection of Horford (10:39), when he was assessed a flagrant-two for elbowing Mortiz Wagner in the groin.
The C's were trailing 88-81 heading into the final frame, that was the closest they would get the rest of the way -- as they are now 22-8, which is still the league's best record.
Boston struggled offensively, especially from behind the 3-point arc, going 11-of-46 (23.9%) and 35-of-84 (41.7%) overall.

"We had good looks. Even when they’re not going in, you have to keep moving the ball and shooting it," Celtics interim head coach Joe Mazzulla said.

The Celtics will host the Magic once more on Sunday with a 3:00 ET matinee afternoon tip-off.