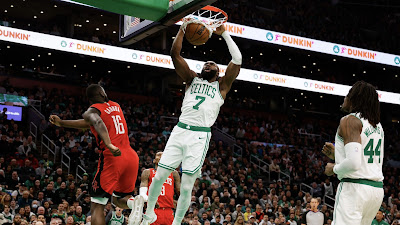 The Celtics picked up from where they left off on Christmas Day by beating the Houston Rockets 126-102 at TD Garden Tuesday night.
Interim head coach Joe Mazzulla was ruled out with eye irritation just minutes before tip-off, while assistant coach Damon Stoudamire filled in to make his debut.

"It's always a little easier when you've got JT and JB," Stoudamire said after Jayson Tatum and Jaylen Brown combined for 77 points to lead the Celtics to their third straight win. "It's not a bad start."

Brown scored 14 of his game-high 39 points in the third quarter and finished with 14-of-26 from the field, including 6-of-15 from deep. Tatum had 38 points on 12-of-25 from the floor and 6-of-16 from 3-point territory to give Stoudamire his first victory.

"I found out probably with about 10 on the (pregame) clock. But in a lot of ways that's better," said Stoudamire. "I'm pretty sure I'm going to check my phone and there's going to be a lot of people saying 'Why didn't you tell me?' Well, I didn't know."

Robert Williams chipped in 11 points and 15 rebounds off the bench, as the only other Celtic to reach double-digit scoring. Brown and Tatum become the first C's duo to score at least 38 points each since Larry Bird (48) and Robert Parish (38) back in 1985.

Jalen Green led Houston with 28 points, Kevin Porter Jr. added 22 points, nine assists and Kenyon Martin Jr. contributed with 17 points for the Rockets -- who fell to 10-24 on the season.
The Celtics were ahead 65-62 with 6:55 left in the third quarter, before Brown was fouled hard by Porter Jr. (assessed a Flagrant-1) that sparked a 9-3 spurt. But, Houston kept hanging around, as they trailed 90-81 heading into the final frame.
Boston used a 11-3 run to start the fourth on their way to a 24-point advantage, outscoring the Rockets 34-21 in the period to secure the victory.
The Celtics look to wrap up their seven-game homestand (currently 3-3) on a positive note Thursday night when they host the Los Angeles Clippers.