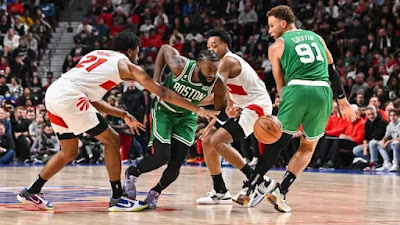 The Celtics continued their six-game road trip with a 116-110 victory over the Toronto Raptors Monday night at Scotiabank Arena.
Jayson Tatum finished with 31 points on 11-of-24 from the field, including 5-of-10 to go along with 12 rebounds, while Jaylen Brown had 22 points, eight rebounds and eight assists.
Marcus Smart returned from a hip contusion to add 18 points, seven assists and Blake Griffin, who started in place of Al Horford (rest), chipped in 13 points (5-of-6 from the floor) and eight rebounds in 32 minutes of action to help improve the Celtics to a league's best 20-5.

"20 and five, that's big," Tatum said in his postgame comments. "That's kind of how we wanted to start the season."

The Celtics were also without Malcolm Brogdon (non-COVID illness), but are now 16-2 after starting the season 4-3.

"It just shows who we are," Smart said during his postgame presser. "No matter what we go through, we're not going to make any excuses. We're going to continue to play and we're going to own up to whatever happens."

Pascal Siakam led Toronto with 29 points, eight rebounds and seven assists, while Scottie Barnes had 21 points, seven rebounds. Gary Trent Jr. netted 20 for the Raptors, who came in winners of four straight, but are now 12-12, despite being 9-3 at home.
Boston trailed by as many as 10 in the first half and were down 62-56 at the break, before Tatum's 17-point third quarter -- where the C's outscored Toronto 35-18 to take a 91-80 advantage for good heading into the final frame.
Tatum hit is fifth 3-pointer of the night with 3:29 left and Boston up 113-101 to put the Raptors away.
The Celtics are now 5-0 on second nights of back-to-back so far to start the 2022-23 campaign and interim head coach Joe Mazzulla was pleased to see his team responded from falling behind early, despite being shorthanded.

"You have to play the back-to-backs. You can't run from them," Mazzulla told reporters after the game. "Just have the right mindset. I thought our guys did a great job of fighting to stay in the game in the first half."