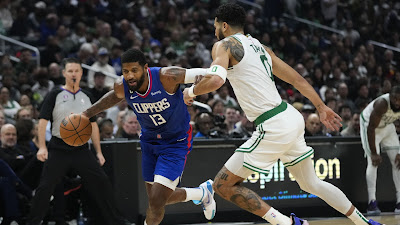 The Celtics came up shirt once again, as they fell to the Los Angeles Clippers 113-93 Monday night at Crypto.com Arena in their first back-to-back loss since opening week back in October.
Jaylen Brown had 21 points on 9-of-15 from the field, while Jayson Tatum struggled shooting for the second-straight game -- going 7-of-20, including 2-of-8 from deep -- to finish with 21 points and 11 rebounds.

"We made a conscious effort to make sure Tatum and Brown played in a crowd all night," said Clippers coach Ty Lue during his postgame presser.

Malcolm Brogdon scored 18 points to go along with six assists and Grant Williams scored 14 points off the bench for the C's, who still own the league's best record at 21-7.
Boston was without Robert Williams, despite saying he was "day-to-day" last Friday afternoon, and Al Horford (personal reasons).
Paul George had a game-high 26 points, six rebounds and Kawhi Leonard, played in just his ninth game of the season, recorded 25 points, nine rebounds and six assists. Marcus Morris chipped in 13 points for the Clippers, who were without Norman Powell and improved to 16-13.
Los Angeles used a 20-3 burst to open the game and scored 11 straight as part of a 17-8 run in the second quarter.
In a low scoring first half for the Celtics, they trailed 56-47 at the break. Los Angeles used another 13-7 run to start the third and later a 7-0 spurt, as Boston was behind 88-72 heading into the final frame.
The Clippers scored seven answered points to start the fourth period and the C's deficit eventually ballooned to 104-80 -- the largest of the night -- with 6:44 left to play.
Boston committed 15 turnovers and the Clips forced 10 steals and converted those into 14 fast break points.

"I think constantly keeping perspective is good in the long run," said Celtics interim coach Joe Mazzulla. "We understand it's a long year...every time we lose a game it can't be the end of the world."

The Celtics are currently 3-2 on their six-game road trip, before they wrap up a mini west coat swing against the Lakers (11-15) Tuesday on a second night of a back-to-back. TNT has the tip-off at 10:00 ET.