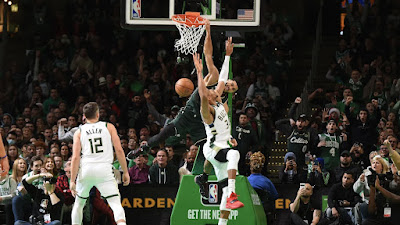 The Celtics made it two wins in a row by beating the Milwaukee Bucks 139-118 in a Christmas Day showdown at TD Garden.
Jayson Tatum scored 20 points in the third quarter on his way to a game-high 41 points connecting on 14-of-22 overall from the field, while Jaylen Brown added 13 of his 29 points in the final frame on 11-of-19 shooting overall and 5-of-9 from deep.
Brown also contributed on defense, especially when he set a pick that sent Giannis Antetokounmpo to the floor late in the fourth, which led to the former league MVP to immediately get back up and shove the C's wing in the back.

"I thought I was playing pretty physical defense, nothing dirty. It seemed like it was a clean play," Brown said in his postgame presser. "Maybe he was a little but frustrated. He got up and threw an elbow at me, for whatever reason."

Antetokounmpo was issued a technical foul with 3:41 left to play after some back and forth jawing between him and Brown, before Bucks coach Bud Budenholzer pulled his starters for good.

"There's a difference between trying to be a tough guy and letting your opponent know that I'm not backing down, I'm not afraid of any challenge or any matchup whatsoever," Brown said. "In that moment I was just letting him know that."

Al Horford and Grant Williams each netted 11 points respectively, hitting a combined 6-of-11 from behind the 3-point arc to help the Celtics improved to a league's best record of 24-10 on the season.
Milwaukee was led by Antetokounmpo's 27 points on 9-of-22 from the floor and 1-of-5 from 3, to go along with nine rebounds and three assists.

"Limiting's crazy. [Antetokounmpo] had 27," said Boston's interim coach Joe Mazzulla when asked about the team's defense on the All-Star. "He's a great player, and you've got to be disciplined against him."

Jrue Holiday had 23 points, seven assists, Brook Lopez added 16 points and Pat Connaughton chipped in 15 on 5-of-9 from the field for the Bucks, who fell to 22-11.
The Celtics had a double-digit advantage in the first quarter (10) and in the second (11), but Milwaukee cut the lead to one by the break (62-61).
Boston used a 18-10 run to open the second half, capped off with a Tatum 25-foot 3-pointer, before Grant Williams' 3 put the C's ahead 100-86 to end the third period.
The Celtics used another 10-5 spurt to start the final frame and the closest Milwaukee would get was 13, as the home team was ahead by as many as 22 with 2:15 left -- following a 3-ball from Derrick White (12 points, five assists).
This was the first meeting between these two teams since Game 7 of the Eastern Conference semifinals last spring and the second straight Christmas Day matchup -- Boston lost to the Bucks 117-113 on the road a year ago.
The Celtics are now 2-3 on their current seven-game homestand, next up is the Houston Rockets (9-23) on Tuesday night.
Game Notes:
Boston made 58.8% of their field goal attempts, including 48.7% (19-of-39) from long-distance, while the Bucks were 50% from the floor and 36.1% (13-of-36) from 3-point territory. The Celtics outscored the visiting team 54-40 in the paint and had 29 assists on 50 shots. The Bucks out-rebounded the C's 39-35 and dished out 22 dimes on 42 baskets.
Joel Pavón
Follow @Joe1_CSP