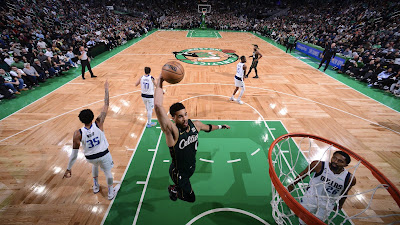 The shorthanded Celtics cruised past the Charlotte Hornets 140-105 at TD Garden Monday to win their fourth straight on a second-night of a back-to-back.
Jayson Tatum led all scorers with 35 points on 15-of-28 shooting after returning from a one-game absence in the C's 130-121 victory over the Washington Wizards -- where he sat out due to an ankle injury.
Marcus Smart finished with 22 points on 8-of-11 from the field, including 6-of-9 from deep to go along with a career-high 15 assists. Malcolm Brogdon had 21 points, six assists off the bench for Boston -- who improved to a league best 17-4 on the season.

"This is a treat. For any NBA player, it's a treat playing on an NBA team like this," said Malcolm Brogdon in his postgame presser. "For me and Blake [Griffin], we've been in situations where a team is not winning, where the team is really struggling and there's chaos. So definitely I try to encourage the guys to be appreciative of what they have here."

Derrick White added 15 points, six assists and Blake Griffin was 4-of-5 from the floor to net nine points, as both started in place of Jaylen Brown (neck) and Al Horford (back) respectively.
Jalen McDaniels scored 24 points and Kelly Oubre Jr had 22, while P.J. Washington chipped in 16 points for the Hornets -- as they lost their 12th in 15 tries and fell to a 6-15 record.
Charlotte was also without former C's players Gordon Hayward (shoulder) and Terry Rozier (illness).
The Celtics jumped out to a 12-19 advantage in the first, before hitting six unanswered 3-pointers in a middle of a 24-4 run. Tatum ended the quarter with 16 points, as Boston was ahead 45-19.
Despite Charlotte outscoring the Celtics 36-33 in the second period, they still trailed 78-55 at the break.
Boston led wire-to-wire and by as many as 42 points in the second half, as they also dished out a season-best 40 assists on 55 made baskets.
The Celtics have won 13 of their last 14 and will host the Miami Heat (10-11) on Wednesday and Friday to wrap up their six-game homestand.