Robert Williams has reportedly progressed to 3-on-3 workouts 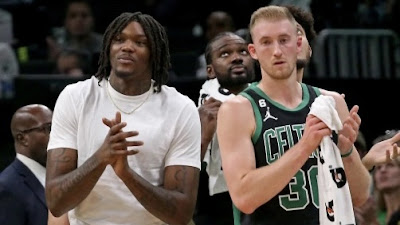 The Celtics are enjoying a nine-game win streak following a 117-109 victory over the New Orleans Pelicans Friday night.
While the C's currently own the NBA's best record at 13-3, they've accomplish this with being shorthanded the moment the 2022-23 campaign began. Center Robert Williams has been out since undergoing a procedure on his left knee back on Sept. 23 -- which the team announced he'd miss 8-12 weeks.
With Williams hitting the eight-week mark two days ago, interim head coach Joe Mazzulla told reporters that the 25-year-old big man has been doing 2-on-2 and 3-on-3 workouts with members of the coaching staff. Mazzulla was asked if he believed when Williams does eventually return would it interrupt Boston's hot start.

There is still no official date for Williams to make his return to either practice or games, but it appears that he continues to be on pace with the original timeline that was set.

"We're happy with him as far as his progression and the work he's put in toward coming back," Mazzulla said. "He's picking it up on the court a little bit. He looks good. He's healthy and responding well to it. He's in a good space as far as patience, and he's doing the work he needs to do."

Williams partially tore his left meniscus back in March before returning in the middle of the opening-round of the playoffs against the Brooklyn Nets, roughly four weeks later. Though he never was fully healthy throughout the Celtics' run to the NBA Finals, the team's training staff was confident that all Williams needed was an offseason to heal up.
Unfortunately, while getting ready for training camp in September, Williams decided to get some maintenance surgery on his left knee after feeling pain during his workouts. Despite the minor setback, Mazzulla is excited for his starting center's return and impact as a lob threat, excellent passer and of course a rim protector.

"He'll help our spacing on the offensive end," Mazzulla said. "Defensively we're doing a great job of our individual defense and our shift activities, and he'll fit right in as far as our rim protection. So, both systems were built for our full team, so when we get that it'll be a seamless transition."

Williams has been seen actively supporting his teammates from the sidelines, something Mazzulla is happy to see, especially once his roster is fully healthy.

"The guys really like playing with each other, and when guys are out they're very supportive of each other when they come back. So, they're really excited to have a full team. I see that in them," he said.

The Celtics look to make it 10 wins in a row when they face the Chicago Bulls in their mini road-trip finale Monday night.
Joel Pavón
Follow @Joe1_CSP