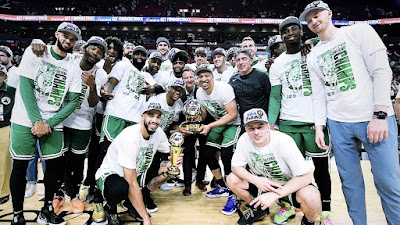 The Celtics have announced some key regular season dates after the NBA released their 2022-23 schedule Wednesday afternoon.
The reigning defending Eastern Conference champs will begin the year hosting the Philadelphia 76ers at TD Garden on Oct. 18 for NBA Opening Night (7:30 p.m. ET) -- the first of a doubleheader on TNT -- followed by the second matchup out west with the Golden State Warriors getting their championship rings, before taking on the Los Angeles Lakers.
Boston will travel to South Beach on Oct. 21 to face the Miami Heat for the first time since their Game 7 win to advance to the NBA Finals last spring. After that, two clubs see each other again on Nov. 30, Dec. 2 and Jan. 24.
The Celtics get to celebrate Christmas Day 2022 at home when they face the Milwaukee Bucks (5 p.m. ET) in a rematch of last season's X-mas loss to Giannis Antetokounmpo on the road. The two teams that battled in the East semifinals this past May and went seven games, will face off two more times on Feb. 14 and March 30.
Boston and Golden State will meet in their NBA Finals rematch on Dec. 10 in San Francisco and again on Jan. 19 at home.
As far as rivalries go, the Celtics matchups against the Lakers will be on Dec. 13 in Los Angeles and Jan. 28 at the Garden. Boston will also take on the Brooklyn Nets come Dec. 4, Jan. 12, Feb. 1, and March 3 regardless of reported trade rumors between both teams over the past few weeks.
Meanwhile, the Celtics have 25 national TV games scheduled -- four more than the 2021-22 campaign -- 11 on ESPN, nine on TNT and five on ABC, not counting the 12 times they’ll be on NBATV. They have 13 back-to-back games, along with seven straight at home (their longest homestand since 1980) from Dec. 16 through Dec. 29.
Boston has a few long road trips early in the season including a six-game trip (the longest of the season) from Dec. 4 through Dec. 13, and two five-game trips in late October and late November respectively.
According to insider John Karalis, the Celtics plan to unveil their 2022-23 City Edition uniforms on opening night, as a tribute to the late Bill Russell -- a project they were collaborating with the icon himself in recent years -- which they will don a total of 12 times this season (including his birthday on Feb. 12).
To view the Celtics full schedule, click here
Joel Pavón
Follow @Joe1_CSP