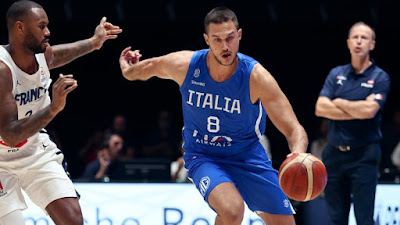 Danilo Gallinari will not be ready to return by opening night, but could make his Celtics debut come November.
According to Sportando, Gallinari is reportedly out "at least two months," meaning he'll miss training camp with his new team. The veteran forward suffered a torn left meniscus Saturday night playing for Italy in a FIBA World Cup qualifier against Georgia.
Boston opens the 2022-23 season against the Philadelphia 76ers on Oct. 17 and they'll likely play the six games scheduled that month without Gallinari. While a November return is not ideal, it's a much better outcome than what was initially feared was a torn ACL in the same knee Gallinari got surgically repaired back in 2013.
Celtics head coach Ime Udoka is going to rely on his frontcourt depth of Al Horford, Robert Williams and Grant Williams a little more than planned to start the season in Gallinari's absence, which should be no more than a month of games if the recovery from the knee injury doesn't get extended.
Gallinari, 34, signed a two-year, $13.3 million deal with Boston in July and was brought in to provide some much needed scoring off the bench for a roster wanting to get back to the NBA Finals. He averaged 11.7 points (38.1% from 3-point territory) and 4.7 rebounds for the Atlanta Hawks last season.
Joel Pavón
Follow @Joe1_CSP