Bill Russell's No. 6 to be retired across NBA 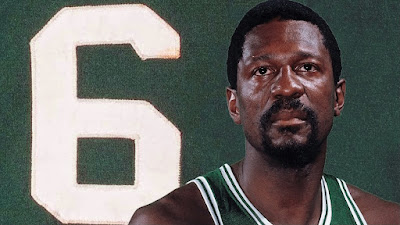 The NBA announced Thursday afternoon that all 30 teams will retire the No. 6 in honor of the late-great Bill Russell, who passed away back on July 31.
The Celtics, basketball and social activist icon becomes the first player in NBA history to have his jersey retired across the league. In addition to commemorate Russell, all players will also wear a patch during the upcoming 2022-23 season and every arena's parquet will display a clover-shaped No. 6 logo.

"The life and legacy of 11-time NBA champion and civil rights pioneer Bill Russell will be honored by retiring his uniform number, 6, throughout the league. The iconic Naismith Memorial Basketball Hall of Famer will be the first player to have his number retired across the NBA," the league released in a statement.

Lakers legend Magic Johnson along with many others called for commissioner Adam Silver to retire Russell's iconic No. 6 league-wide in the days following his passing, just like MLB did with Jackie Robinson's No. 42 in 1997 -- more than 20 years after his death.
Robinson broke Major League Baseball's color barrier with the Brooklyn Dodgers back in 1947, while Russell was just a junior in high school. Not only was Russell one of Robinson's favorite athletes, as he went on to win 11 NBA titles in 13 seasons with the Celtics, he was also a pallbearer at Robinson's funeral in 1972.
Both Robinson and Russell were significant figures in the Civil Rights movement, the fight against racism and social inequality -- which along with their Hall-of-Fame careers -- have left a lasting impression on younger generations several decades later.
In just less than two weeks since Russell's passing, the NBA will follow MLB's lead in honoring one of sports' great pioneers and social advocates.

"Bill Russell's unparalleled success on the court and pioneering civil rights activism deserve to be honored in a unique and historic way," said NBA Commissioner Adam Silver in a press release. "Permanently retiring his No. 6 across every NBA team ensures that Bill's transcendent career will always be recognized."

Players who currently wear No. 6 such as Alex Caruso, Lou Williams, Kristaps Porziņgis and LeBron James can continue to do so if they choose, which was the same rule that MLB applied when they retired Robinson's No. 42.
Hall-of-Fame forward Julius Erving, Walter Davis, and Avery Johnson are among the few that already have No. 6 retired with the Philadelphia 76ers, Phoenix Suns, and San Antonio Spurs, respectively.
Joel Pavón
Follow @Joe1_CSP