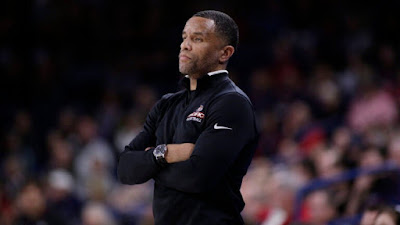 Damon Stoudamire has reportedly agreed to become a Celtics assistant coach on Ime Udoka's staff, according to Stadium's Jeff Goodman.
Stoudamire, who averaged 13.6 points and 6.1 assists during his 13-year NBA career, was the head coach at Pacific where he put together a 71-77 record after taking over a team that went 8-20 prior to his arrival.
Pacific went 23-10 in 2019-20, and Stoudamire was named West Coast Conference Coach of the Year.
Celtics new head coach Udoka and Stoudamire grew up together in Portland and are longtime friends. After Udoka brought in former Spurs assistant Will Hardy, Stoudamire was rumored to be his next target.
During last week's introductory press conference, Udoka described the type of front office people he wanted to surround himself with.

"I'm looking for energy, juice in the building, a great environment to produce winning," Udoka said during his presser. "That's what I'm looking for in my staff and some of the people I've talked to so far. Then, in general, just a little bit of mix. I don't feel like I need to have an energetic staff more so than a veteran staff, so I'm looking at both areas and a ton of great candidates. We're kind of nailing that down now as we speak."

The overhaul of the Celtics coaching staff continues, as longtime assistants Jay Larranaga, Jaime Young were both let go, while Jerome Allen found a home on the Pistons' staff and Scott Morrison has interviewed with the Wizards for their head coaching vacancy.
Joe Mazzulla, who has been with the Celtics since prior to the 2019-20 season, will maintain his role as an assistant coach on Udoka's staff.
Joel Pavón
Follow @Joe1_CSP