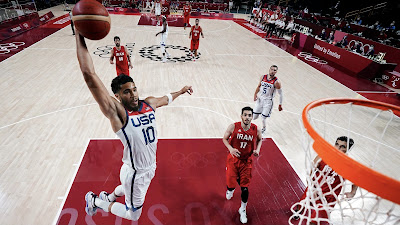 Team USA (1-1) bounced back in a big way Wednesday, rolling past Iran (0-2) 120-66 at Saitama Super Arena in Saitama, Japan.
Damian Lillard finished with 21 points (all on 3-pointers), going 7-of-13 from behind the arc, to along with five assists to lead six players for the U.S. in double-digit scoring. Devin Booker added 16 points in a starting role, while Jayson Tatum had 14 points in 17 minutes off the bench.

"I think we came out with a lot more urgency," Lillard said in his postgame presser. "Our energy was higher, we played at a faster pace. We were more aggressive, and we played like ourselves. We didn't come out here and think that it was just gonna happen, we made it happen, and that’s the way that we got to play if we want to be successful in these Olympics."

All 12 of Team USA's roster scored at least four points, including Kevin Durant (five assists, five rebounds), who recorded 10 points -- after not playing in the fourth quarter -- is now five away from tying Carmelo Anthony's 336 points in Olympic games.
In a near wire-to-wire loss for Iran, Hamed Haddadi and Mohammad Jamshidijafarabadi led their team with 14 points respectively.
For Team USA, it was a much needed victory following a surprising 83-76 loss to France in their opener on Sunday, which was only their sixth loss out of 144 games played in the Olympics and fourth in 57 games overall since NBA players could participate back in 1992.
With Jrue Holiday inserted into the starting lineup for defensive purposes, Iran led 7-5 to start the first quarter before the U.S. went on a 12-4 run and Lillard caught fire from 3. Before you knew it Team USA had outscored Iran 34-7 to take a 51-18 lead, the largest of the half.
While ahead 60-30 at the break, the Americans hit 56.6% of their shots, including 50% of their 3's in the first 20 minutes. In the second half the margin increased to 57 at one point, as they finished 19-of-39 on 3-pointers.
The U.S. forced 23 turnovers to convert them into 38 fast break points, while they also held Iran to 35.6% shooting and 34.6% from 3-point range.

"When we defend that way, we can get out in transition, get easier baskets, not playing against the set defenses often," Lillard said. "I think we did that from the jump tonight, and it shows in the final score."

The win also improved Team USA's record to 100-7 since Jerry Colangelo was named managing director of the men's program in 2005. Colangelo plans to retire from his position after the Tokyo Olympics and will be replaced by 1996 Olympic gold medalist Grant Hill.
The U.S. is seeking another win on Saturday to advance to the quarterfinals when they face the Czech Republic (1-1) -- who beat Iran and lost to France -- to conclude Group A play. Tip-off is at 8 AM.
Joel Pavón
Follow @Joe1_CSP