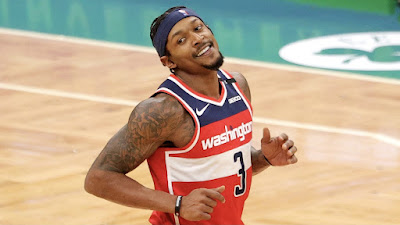 With the NBA offseason officially underway, superstar guard Damian Lillard and Ben Simmons have already been linked to trade rumors over the past few weeks.
Another name to keep an eye on is Washington Wizards All-Star Bradley Beal, who could be entering the final year of his current deal and potentially become a pending free agent next summer if he declines his player for the 2022-23 season.
Beal, who recently entered health and safety protocol which caused him to miss an opportunity to play with best friend Jayson Tatum and Team USA Basketball in the Tokyo Olympics, could request a trade before next week's NBA Draft.
According to Jake Fischer of Bleacher Report, "word has reached front offices around the league that Wizards All-Star guard Bradley Beal is considering requesting a trade prior to Thursday night's event."
Fischer's report also mentions that "Beal does not have a proverbial list of preferred destinations, but it was mentioned by multiple sources that he would welcome joining teams such as Boston, Golden State, Miami or Philadelphia -- although Beal requesting a trade would all but guarantee an expansive bidding war across the league."
While Beal's friendship with Tatum has been well documented, the Celtics have been rumored to be interested in the Wizards guard over the past year. The Heat always have a shot to add star talent and the 76ers also makes sense after their disappointing second-round knockout at the hands of the Atlanta Hawks several weeks ago.
It will interesting to see how this all plays out if a request from Beal's camp is actually made, especially with a team like the Warriors, who have been seeking another star-caliber player to pair with Steph Curry and Klay Thompson since losing Kevin Durant to free agency back in the summer of 2019.
Joel Pavón
Follow @Joe1_CSP