Friday's Team USA vs Australia exhibition has been canceled 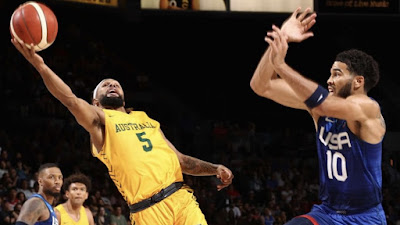 USA Basketball announced that Friday's exhibition rematch between the US Men's National Team and Australia has been canceled "out of abundance of cation."
The cancelation came hours after Washington Wizards All-Star guard Bradley Beal was ruled out for the Olympics following being placed into health and safety protocol on Wednesday. Detroit Pistons forward Jerami Grant was also placed into health and safety protocol, but no word on if he'll be heading to Japan with his teammates or not.

Out of an abundance of caution, the USA Men's National Team exhibition versus Australia on Friday has been cancelled.

The USA Women's National Team's matchup with Australia will be played at 2:30 PM ET on NBCSN.


Team USA lost its first two exhibition games against Nigeria and Australia, before beating Argentina on Tuesday night 108-80. They are still scheduled to host Spain in Las Vegas on Sunday before departing for Tokyo next week.
Jayson Tatum, who missed Team USA's blowout victory over Argentina with right knee soreness, went through team shootaround after being listed as day-to-day.

"He practiced. He did a full practice," Team USA head coach Gregg Popovich told reporters Thursday. "He's actually down on the court with coach (Ime) Udoka right now getting extra work in."

Tatum scored 15 points in Team USA's loss to Nigeria and just eight vs Australia, while playing a total of 55 minutes of action after two games.
Joel Pavón
Follow @Joe1_CSP